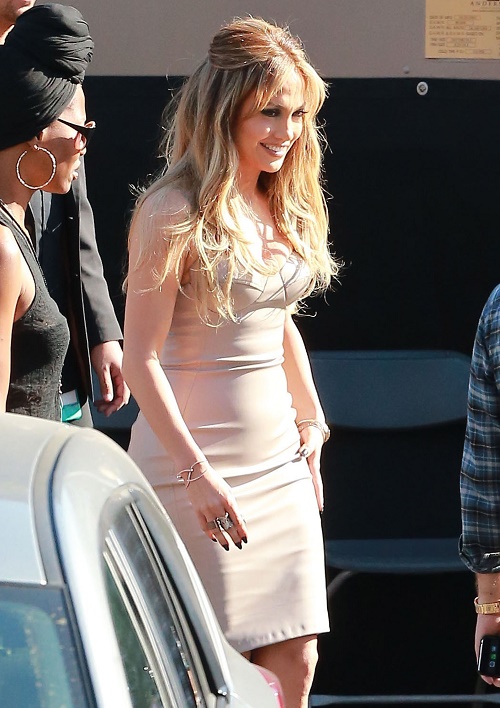 Jennifer Lopez and Casper Smart are back together (again)! The American Idol judge has remained coy about her relationship status and whether or not she had a boyfriend for several months now. But TMZ has officially confirmed that J-Lo and Casper are definitely back together – and the website posted photos of Jennifer and Casper laying on the PDA and kissing in front of everyone at the set of FOX’s American Idol. It was pretty clear that Jennifer and Casper aren’t trying to keep their relationship a secret anymore.

Jennifer Lopez shocked everyone in 2011 when she began hooking up with her much younger and much poorer back-up dancer Casper Smart. Everyone assumed Casper was just a rebound after her divorce from singer Marc Anthony, but the odd couple took everyone by surprise and lasted nearly 2 ½ years. In June 2014, news broke that J-Lo and Casper had officially broken up after she caught him cheating on her and sending sexy messages to other women on social media. Although J-Lo never would comment on whether or not Casper cheated on her, it seemed pretty obvious.

Since Casper and Jennifer’s messy 2014 break-up, she and Casper have been spotted together on more than one occasion – like dancing the night away at Big Sean’s concert and even attending a GQ event together. Despite the media’s speculation about their relationship, J-Lo refused to admit that she had taken back Casper and they were dating again. Now that there are photos of her locking lips with Smart at American Idol, there really is no way she can continue to deny their reconciliation.

So are you shocked that Jennifer Lopez actually took back Casper Smart? Do you think that she should have forgiven him? If he cheated on her once, who is to say that he won’t cheat on her again? Let us know what you think in the comments below!