Jennifer Lopez In Love With Ryan Guzman: Thankful For Casper Smart Scandal And Breakup – Now Free To Be With Ryan! 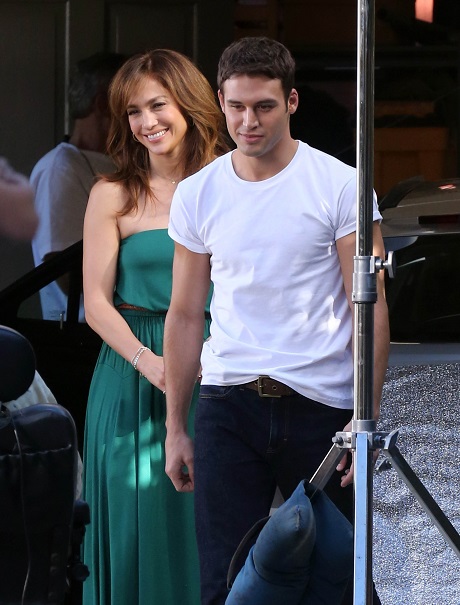 Casper Smart knows that Jennifer Lopez has a thing for flings with costars, so he should have seen this one coming. Poor Casper didn’t stand a chance against Jennifer Lopez’s hot new costar in the upcoming film The Boy Next Door, where the sexy triple-threat has some steamy scenes with Mexican-American hottie Ryan Guzman.

And why wouldn’t JLo fall for Guzman? The Texas-born former Calvin Klein model is a dancer, and actor, has an amazing body, and, at 26, is just the right age for the mom of two. Rumors started swirling late last year as the two reportedly had chemistry that was off the charts while filming the steamy scenes, some of which required Guzman to be au natural!

Their chemistry was so strong that Jennifer couldn’t take her mind off her costar. She was so excited about Ryan that she would go home after filming and talk about how amazing he is to Casper. When Casper complained, Jennifer blew off his insecurities, telling him that she was talking about Ryan on a professional level. Casper was all too familiar with her history of falling for dancers and costars, and quickly became a fixture on the set.

Jennifer played things cool for a while, and then became busy with American Idol. She felt stuck with Casper because she brought him into her home, her business and personal life, and even the lives of her children. Breaking things off with Casper to move on to Ryan wouldn’t have just broken Casper’s heart (and bank account), but it might have damaged her career. Which is exactly why Jennifer was elated when the news broke about Casper texting two transsexuals, sending them half-naked pictures of himself and making his own requests for pictures.

Jennifer used the new reports as her out with Casper. She told him that she was hesitant to trust him again, but even if she were to give him another chance, she cannot have this kind of media attention and doesn’t want her kids exposed to it either. Jennifer is very protective of her kids, and just recently finalized her divorce from Marc Anthony, which includes terms for both Jennifer and Marc to shield their children from the media. Casper knows how she is with the kids and her reputation, so he bought her excuse, though still maintaining his innocence.

More reports were surfacing about Casper’s sordid past as a dancer and many who knew him well confirmed he was gay and just using Jennifer for money and fame. He still didn’t get his walking papers. Now, however, Ms. Lopez has set her sights on a new hottie and finally had the courage to set Casper free. Jennifer knew it was only a matter of time before she’d hear about more of Casper’s indiscretions, so she’s been biding her time, waiting for the right time to cut him loose. His newest scandals, which involved reports of cheating with two different transsexuals, proved to be just what JLo needed and came right at the perfect time.

While she is playing it cool now, she knows that she will be meeting up again soon with Ryan, as they will travel and share the red carpet together as part of the press tour for The Boy Next Door. The movie, about a newly single older woman who seduces much younger man, may be life imitating art for Jennifer. Remember when you see these two come out publically as a couple…that you heard it here first!