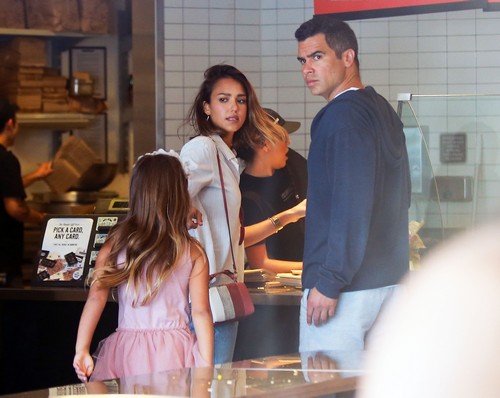 Jessica Alba’s Honest Company is in a slew of trouble and just got slapped with not one, but two multi-million dollar lawsuits. But, that’s just the tip of the iceberg for the celeb and business mogul – according to a new report Jessica’s personal life isn’t fairing much better and she and her husband Cash Warren’s marriage is falling apart and they are on a brink of a divorce!

On September 9 Jessica Alba put on her fake smile for the cameras at the launch party for her latest line of Honest Products, but eyewitnesses at the elegant event say that in between photo ops and interviews Alba was throwing back drinks and appeared frazzled and stressed out. The source of her problems? Her legal woes and impending break-up from hubby Cash Warren.

An inside source dished to In Touch Magazine, “They have one of the worst relationships in Hollywood. It wasn’t always like this – they used to be completely in love – but thing have recently really taken a turn for the worse, and friends are concerned for their marriage.” The insider went on to tell the tabloid that Jessica Alba’s Honest Company is actually the reason behind her constant fighting with hubby Cash, apparently he is jealous of her business’s success and he is tired of playing the role of stay-at-home dad while Jessica jets off to meetings and other events.

If Jessica Alba and Cash Warren were already fighting over the amount of time she poured in to the Honest Company before she was sued in two different class action suits – then we can only imagine the amount of time she is going to be spending away from home now, trying to clean up this mess. It doesn’t look like she will have any free time to invest in fixing her marriage any time soon. Do you think that Jessica and Cash will be able to fix their relationship woes, or is there a divorce in their near future? Share your thoughts in the comments below!