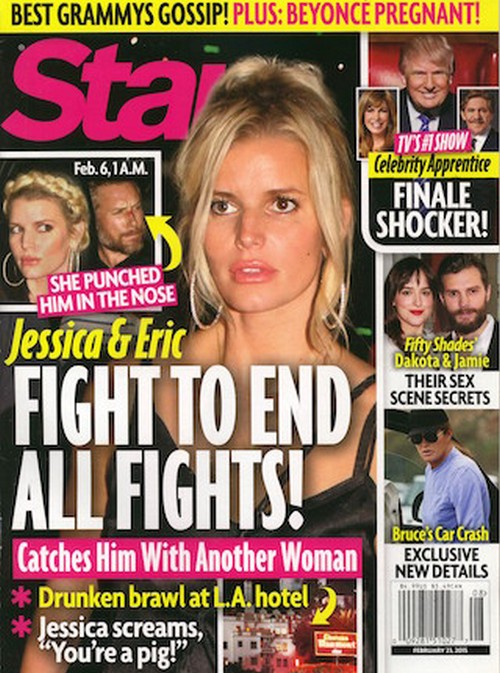 Jessica Simpson gave Eric Johnson a bloody gash on his nose when she caught him cheating at the Chateau Marmont according to a new report. Jessica Simpson and Eric Johnson got married earlier this summer, but according to reports, they’ve already started having issues. The latest report from Star Magazine claims that eyewitnesses saw the two going at it in a drunken brawl at the Chateau Marmont in West Hollywood, all because Jessica found out about Eric’s drunken flirting with another woman.

Apparently, Jessica went to use the bathroom and when she came back, she found Eric flirting with this mystery brunette. Then, ‘all hell broke loose’ and Jessica started whacking at Eric with her designer handbag. He apparently received a ‘bloody gash’ on his nose from all the violent pelting, which you would think other people saw. But for whatever reason, only Star’s sources managed to witness this ‘massive fight’, despite the fact that it supposedly happened in a popular LA hotel frequented by spies and paparazzi.

If Jessica Simpson had hit Eric Johnson, People Magazine would have been all over it. Her reps would be involved, she would probably be forced to release a statement, and the entire media of Hollywood would be covering it. Instead, Star writes about Jessica and Eric having a spat over a little harmless flirting? Come on…

And while I have no doubt that Eric Johnson probably has a wandering eye, there is still no proof that he’s cheating on Jessica. Sure, it’s possible that Eric is cheating on Jessica – especially based on all the rumors – but there is still no proof. And if Jessica hasn’t lost her cool about the cheating rumors, then I don’t think she would lose her cool at him flirting with another woman.

What do you guys think about this supposed fight that Eric Johnson and Jessica Simpson supposedly engaged in? Do you think that Eric would actually cheat on Jessica, or even flirt with another woman in front of her? Or is this report bogus? Let us know your thoughts in the comments below.