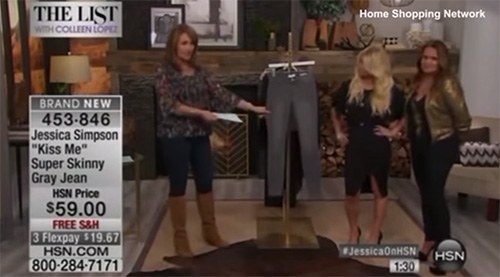 Jessica Simpson reached a new low this week. The pop-singer turned pro boozer decided to allegedly get bombed moments before appearing live on the Home Shopping Network. Jessica had an appearance scheduled on HSN to pimp out some clothes for her “Jessica Simpson Collection.” It looks like someone on her team was slacking, and neglected to babysit the singer before she took the stage and make sure she didn’t throw back too many bottles of wine.

Now, it’s always difficult to tell what exactly is going on with Jessica Simpson. She has always had that light-headed, uber blonde, ditzy thing going on. So she tends to not make any sense – even when she is sober. But, if you watch the video of her on the Home Shopping Network closely, it’s pretty clear that her confusing rambling is the least of her worries. Simpson’s arms are flapping everywhere as she speaks – and it looks like she is holding on to her hip for dear life to steady herself. Of course, the fact that Jessica Simpson was trying to make a plain gray pair of jeans sound sexy didn’t really help her case.

Jessica Simpson’s alleged drinking problems have escalated over the course of the past year. Who could forget that infamous incident where she got into a drunken brawl with her husband Eric Johnson? And then there was that time in March when she was interviewed by Extra at a Teen Vogue event and made zero sense. Also there was those tabloid reports from In Touch Magazine this summer claiming that Simpson was mixing booze and Adderall, and her family was trying to get her into rehab.

Of course, Jessica and her team are denying that she was under the influence of anything during her Home Shopping Network appearance – check out the video and let us know what you think!