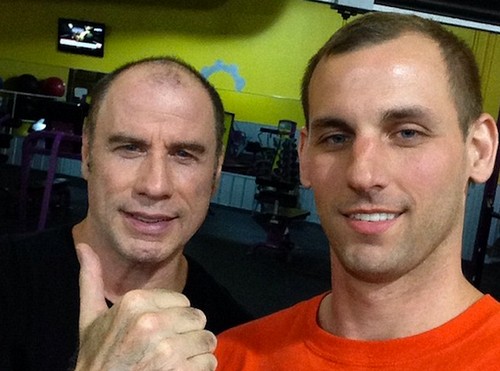 How do John Travolta and Kelly Preston avoid divorce? Look out, masseuses of Hollywood, it looks like John Travolta is back out there trolling for boyfriends Fans spotted John at Planet Fitness at 3 A.M., and whaddya know? He wasn’t working out. No, instead of working out, John Travolta was chatting up a variety of gym go-ers, you know, just out of the kindness of his heart. And exactly what was he asking these buff, handsome men? Well, a Reddit user uploaded his experience with John, explaining, “He asked what I do for a living, if I was married, if I have kids, and what do I do with my spare time.”

John Travolta trolling for men in a gym at 3 A.M.? Why does this not surprise me? Plus, at least it’s not at a massage parlor this time. I think John learned his lesson after getting sued multiple times – you can’t go grabbing a guy’s junk when they’re putting oil on you as part of their job. His new method is clearly go find unsuspecting patrons to flirt with in gyms, and hope he gets lucky.

At this point, John Travolta and Kelly Preston staying married seems more a formality than the result of any lingering affection between the two. They’ve worked out their business arrangement, they’re happy with it, and Scientology is happy with it. Do they need any more? I mean, it’s not like either John or Kelly is going to be greatly affected if people realize John Travolta is gay. Even though most of the country remains clueless about John’s sexual orientation, John Travolta’s gay-ness has been an open secret in Hollywood for a long time. He’s still working, he’s still married, and that’s been the status quo for a long time.

Then again, will Kelly Preston be amenable to John going and attempting to pick up dudes in gyms? Is a divorce even realistic at this stage? Of will Scientology snipers take them out the minute they utter the words ‘divorce’?