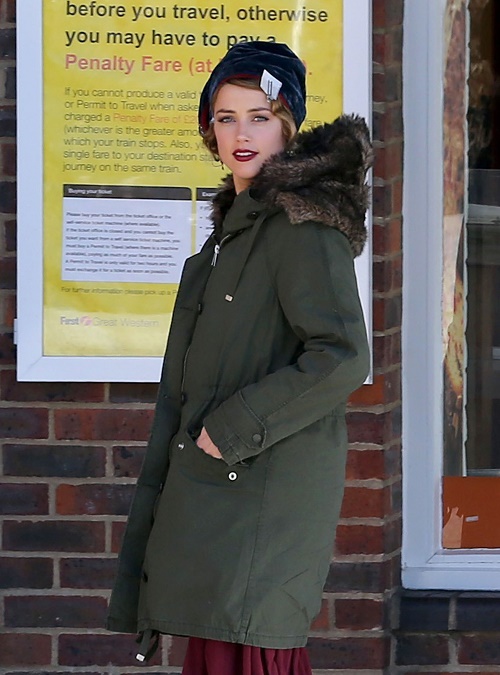 Johnny Depp and Amber Heard have barely been married for three months and they are already on the verge of a divorce – Amber’s alleged cheating with her secret girlfriend iO Tillett Wright is reportedly causing a major issue in their marriage. Amber Heard has been openly bi-sexual for years, so it’s not exactly far-fetched to assume she is cheating on Johnny with another woman. Her “friendship” with io Wright has been intensifying over the last few months.

The May 5 edition of Star Magazine reveals that while Johnny Depp was in Los Angeles nursing his injured wrist (which he reportedly got during a drunken phone fight with Amber), Amber has been partying in New York City with her “friend” iO Tillett Wright. Amber and iO were spotted canoodling at the Tribeca Film Festival after-party, and then attended another event together the next night. As if Amber and iO’s overly affectionate display at the party in NYC wasn’t enough, iO took to social media and posted a cryptic photo of bed at the hotel room in NYC where she and Amber are staying.

According to Star Magazine’s inside sources, “Instead of joining Johnny in LA – Amber is rubbing her relationship with iO in Johnny’s face and he can’t handle it. It’s like she doesn’t have a care in the world. Johnny and Amber are great when they are together – but things take a turn for the worse when they are apart. They are barely speaking at all, their relationship is a mess.”

In iO’s defense, Johnny Depp and Amber Heard’s relationship was a mess before she came along – and the couple were fighting non-stop over Johnny’s incessant drinking and alcohol abuse. If anything, Amber most likely began cheating on Johnny with iO because he wouldn’t get sober after promising to quit drinking multiple times. On the other hand, one could argue that Johnny has been hitting the bottle because he was upset that Amber was cheating on him with another woman. One thing is for sure – their relationship truly is…a mess.