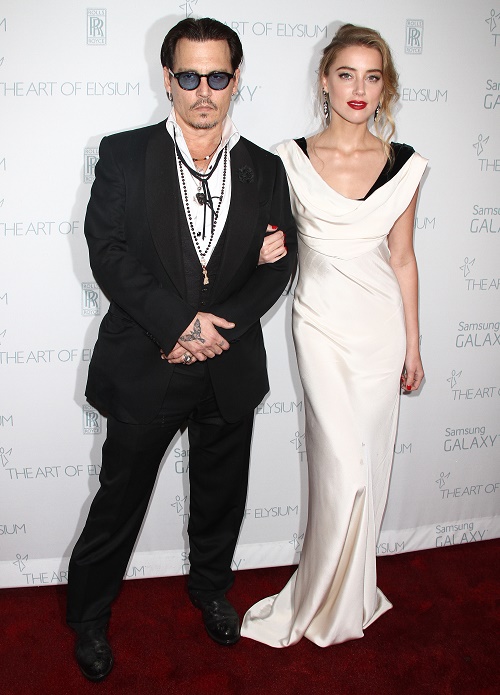 Amber Heard may have been completely over Johnny Depp after his drunken speech at the Hollywood Film Awards, but there’s no way she’s going to leave him. The simple fact of the matter is that Amber Heard does not have the talent or the business acumen to make it to the A-list on her own, and she needs Johnny Depp’s connections to help her get there. So, of course, she probably let Johnny apologize for embarrassing himself and her, and that probably prolonged his mid-life crisis and alcoholism even further.

Let’s be real – who actually trusts Amber Heard’s motives and intentions, or Johnny Depp’s sobriety? Even to the public, the image that Johnny and Amber present is that of 1/2 famewhore, 1/2 older dude having a major mid-life crisis. Plus, Johnny’s not stupid – he’s been in Hollywood long enough to know that Amber is a golddigger and she’s only with him for the fame and money.

There have been enough flirting rumors concerning Amber and her numerous attractive male co-stars for Johnny to turn a blind eye and pretend that she’s faithful and adoring. She might have gotten together with him because of his name, fame, and the awe surrounding the ‘Johnny Depp’, but that soon wore off and what was left? A mess of a man still recovering from a divorce and his career in shambles. And now Amber is stuck with that, but she can’t leave because she’ll have thrown away years of investment on nothing by that point. And we can’t have that, can we?

What do you guys think? Why exactly do you think Amber Heard is staying with Johnny Depp, despite being clearly over him? And why is Johnny continuing to date Amber, even though he knows she’s a golddigger? In fact, why is this couple even pretending as though they’re happy together? Let us know your thoughts in the comments below.