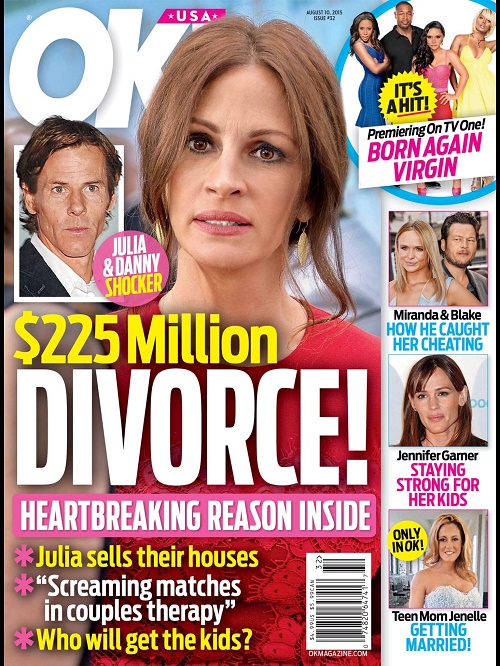 Julia Roberts and Danny Moder have been plagued with divorce rumors for over a year now, and after a decade of marriage, the couple is finally calling it quits and reportedly breaking up. Julia and Danny’s relationship has been under tremendous stress after the suicide of her half-sister and death of her mother. It was obvious there was trouble in paradise when Julia and the kids attended her mother’s funeral service earlier this month – and Danny was nowhere in sight.

This week’s cover of OK! Magazine features a photo of the not-so-happy couple and the headline reads, “$225 Million Divorce: Julia Sells Their Houses, Screaming Matches In Couples’ Therapy, Who Will Get Their Kids?” Apparently, Julia and Danny made one last ditch attempt to save their marriage and headed to couple’s therapy – after not making any progress, and fighting like cats and dogs, the couple has decided to officially pull the plug on their marriage. Of course, we have to give them credit where credit is due: no one expected Julia and Danny to last this long – after all, he was married to another woman when they began seeing each other ten years ago.

An insider dished to OK! Magazine, “Danny just doesn’t feel like they have a true partnership. It has always been her way or the highway.” Julia has pulled rank since day one because she is an award winning actress, and Danny was nothing more than a measly camera man. This is a perfect example of why actors and “the help” should never try to settle down together. Even if Julia wasn’t bossing Danny around, he basically felt inferior to her since day one.

Danny caught a lot of flack because he “wasn’t there for Julia” during the death of her sister and mother. But, as far as he is concerned, he has always been there for her, and she never returned the favor – so Moder decided that enough was enough. The insider explained, “People have been saying that he hasn’t been supportive enough during this difficult time. But, honestly he feels like he has dedicated his life to being a good father and husband, and the support isn’t reciprocated.”

The only thing holding Danny Moder back from officially filing for divorce from Julia Roberts is their three kids: Phinnaeus, Hazel, and Henry. According to OK! Magazine, Danny is scared that Julia will be bitter with him for filing divorce and fight tooth and nail in court for full custody of the kids, and try to take them away from him.

Do you think there is any chance that Julia Roberts and Danny Moder could salvage their relationship at this point? Would Julia Roberts try to keep Danny from their three kids? Let us know what you think in the comments below!