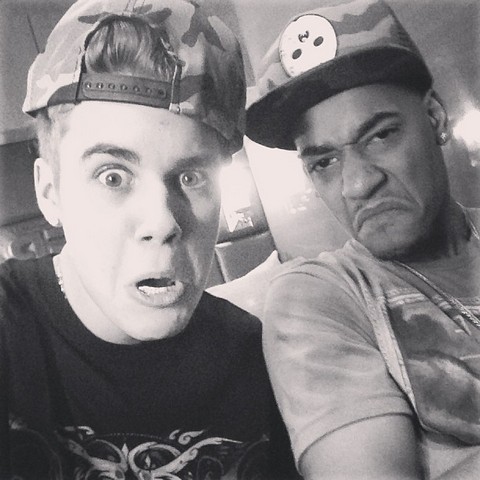 Justin Bieber has some wonderful friends, doesn’t he? No wonder he’s such a nice, mild-manner, well-adjusted boy, with friends like this. According to TMZ, Justin’s BFF Lil Twist has just been charged with six felonies in the Kyle Massey attack, and he could face up to twenty five years in prison if he’s convicted on all the counts.

For those who can’t remember the Kyle Massey attack, it went something like this: Lil Twist was hanging out with Kyle and his friends in Kyle’s apartment in November, but for reasons that are still unclear [but probably justified], Kyle and his brother kicked Lil Twist out. However, Lil Twist soon returned – with friends – and proceeded to beat up Kyle’s brother, Chris Massey, with brass knuckles. And if that wasn’t enough, they also proceeded to steal his wallet and his cellphone, and left him lying in a bloodied heap.

Knowing the severity of Lil Twist’s attack, the charges listed aren’t that surprising: burglary, criminal threats, grand theft, battery, and 2 counts of assault with a deadly weapon. In other words, the police are now actively searching for Lil Twist since there’s a warrant out for his arrest. And when he gets caught, he is in so much hot water that not even Justin Bieber’s connections can help him out this time.

What do you guys think about Lil Twist being charged with six felonies? Is anyone here surprised? Anyone at all? Knowing Justin Bieber and his group of friends, this doesn’t really come as a surprise, does it? They’re all a bunch of violent, entitled wannabe hooligans who think they can get away with anything and everything. At least they’re finally starting to learn that the world doesn’t work that way, especially not with the law starting to catch up to them.