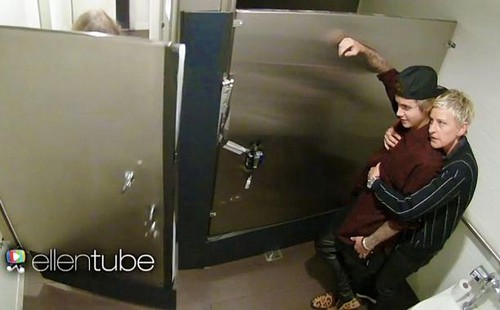 Justin Bieber’s ‘look at how much I’ve reformed’ tour is continuing in full strength, with the latest stop on the Ellen DeGeneres show. It’s a smart choice for Justin Bieber’s attempts to rectify his image and win Selena Gomez back from Zedd – Ellen is a kind host, she’s good to her guests, never makes them uncomfortable with probing questions, and guess what? Selena Gomez is an Ellen favorite.

Now, Justin Bieber has been trying hard over the last few weeks to erase his bad boy image, giving several interviews and apologizing for his past behavior. He’s said multiple times that he’s sorry about the way he’s acted in the past, but he continues reiterating that he’s changed himself around now. The question is – are his words meaningful and honest, or is he just saying all this to win Selena Gomez back?

You might think that this is way too much effort to win an ex-girlfriend back, but then, you wouldn’t be acquainted with the Justin Bieber and Selena Gomez drama. The two have had an on-again/off-again relationship for the better part of the last three years, and both of them are constantly using the media to win/lose/undermine the other person.

In this case, Justin knows that Selena’s finally moved on from him by getting into a new relationship with Zedd. Or at least, Selena’s pretending that she’s moved on from Justin, especially since she’s making no secret of her new romance. But if Justin Bieber’s contrition tour continues and manages to reach Selena – and convince her that he actually has changed – will she take him back?

What do you guys think? Will Justin Bieber actually manage to win Selena Gomez back from Zedd with this ridiculously transparent ploy [which also included making out with Ellen DeGeneres]? Or will Selena continue to ignore her ex-boyfriend? Let us know your thoughts in the comments below.