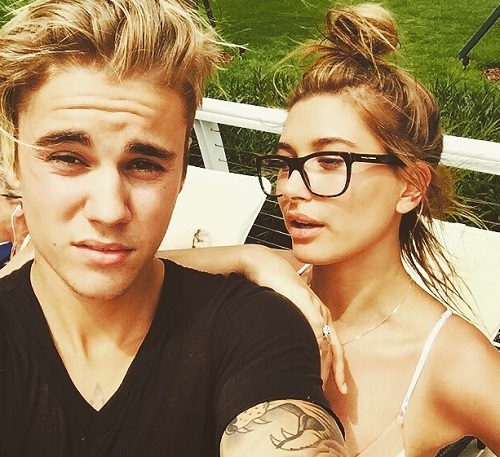 Justin Bieber and Hailey Baldwin are definitely dating, even though Hailey goes on Twitter about once a month to rant that they are not together. Hailey may want to keep her relationship with Biebs on the downlow, but the pop star feels otherwise and recently professed his love for Hailey on Instagram. It’s safe to assume that his ex-girlfriend, and current hook-up buddy, Selena Gomez, is seeing red right now.

Justin Bieber shared an adorable photo of himself posing with Hailey Baldwin – and she has her head on his shoulder. Just in case there was any confusion, you know with all of the women in and out of Justin’s life, the “Baby” singer captioned the PDA pic with this: “The one and only @HaileyBaldwin.” At some point in between taking selfies, Justin and Hailey were spotted jet-skiing together with their arms around each other, and witnesses claimed they looked “very much like a couple.”

Ironically, Justin’s reconciliation with Hailey Baldwin comes just a few short weeks after it was confirmed that Justin Bieber and his ex-girlfriend Selena Gomez have been hanging out secretly, ever since his 21st birthday earlier this year. And rumor has it the former lovers have been working tirelessly together on a new song, and the music video will feature both of them in the shower (although it’s unclear whether they are showering together, or in two different bathrooms).

So either Selena is totally cool with sharing Justin with a half a dozen other girls. Or else she and Justin had a falling out and Hailey Baldwin welcomed him back with open arms. At this point, decoding Justin Bieber’s dating life is seriously more complicated than the Da Vinci Code. Are you Team Selena or Team Hailey? Which girl do you think Justin Bieber should be with? Or is it neither? Let us know what you think in the comments below!