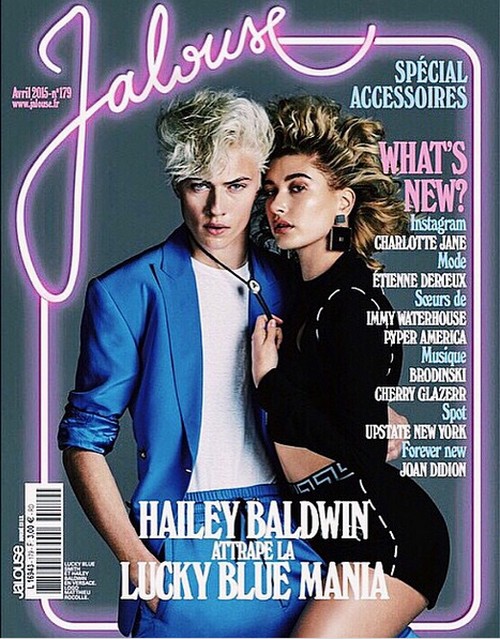 Justin Bieber recently stepped out with his new girlfriend Ashley Moore, and Hailey Baldwin is devastated! Biebs seems to leave a trail of broken hearts behind him wherever he goes – and ironically the majority of them head to Church afterwards to heal their broken hearts. On March 20th Justin Bieber attended the Los Angeles Clippers game, with model Ashley Moore at his side. Justin and Ashley cuddled and canoodled throughout the game, and Biebs made sure to plant a few kisses on the 21 year old for the cameras. Justin and Ashley’s PDA lovefest hit the internet soon after, and his ex Hailey Baldwin didn’t take the news well.

Hailey Baldwin and Biebs dated off and on for months after his break-up from Selena Gomez – but their “relationship” went to hell during Justin’s 21st birthday celebration, when he ditched Hailey during his party to hang out with his old hook-up buddy Yovanna Ventura. When pictures of Ashley and Justin’s date hit the internet, Hailey did what every self-respecting young celeb does – took to Twitter to post backhanded messages that are obviously directed towards Justin, but could also mean 100 other things.

After tweeting depressed messages to her followers like, “You don’t fall in love you choose to love. Conviction is higher than feeling,” and “I’m done faking my emotions for people who can’t handle the truth,” Hailey Baldwin headed to Church. According to our friends at The Gossip Table Hailey was spotted in New York City attending a sermon at Hillsong. At this point Hillsong Church should have a special section of pews reserved for girls who have had their hearts broken by the Biebs, by this time next month Justin’s new girlfriend Ashley Moore will most likely have a seat reserved there as well.

So, do you thin Hailey Baldwin and Justin Bieber are officially over? Or will he dump his new girlfriend Ashley Moore and get back together with Hailey? Why do you think all of Justin’s exes head to church after their break-ups, or is it just a coincidence? Let us know what you think in the comments below!