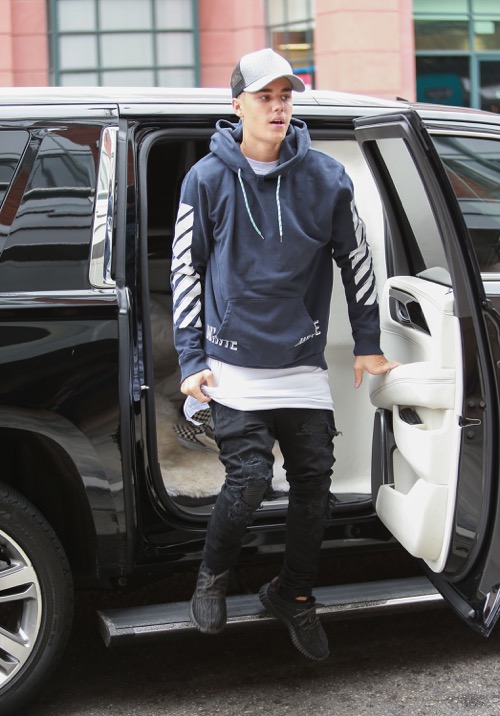 Justin Bieber was spotted stumbling out a restaurant in Beverly Hills – he hadn’t ordered anything – he just up and left! Can this odd behavior be blamed on booze and drugs? Did his night of chugging Hennessey from the bottle during a concert cause Justin to fall off the sobriety wagon?

Here’s what a bystander saw – Justin slunk into Il Pastaio on October 15 wearing a big old hoodie and what looked like a fedora. The singer didn’t wait to be seated – he just grabbed himself a table! According to information passed along to Page Six the Biebs sat there for about two minutes and then he got up and stumbled out.

The bizarre behavior didn’t end there though. The source went on to say that Justin Bieber was wandering around outside of the restaurant for about 10 minutes and this attracted a whole lotta paparazzi attention. It didn’t appear that Bieber had any idea where he was going and onlookers said he appeared very confused. The photogs kept following Justin around until he got in his Escalade and drove away.

There has been a lot going on in the Bieb’s life lately. First there was the drinking and smoking weed on stage at a concert – but that’s old news. And then there were the photos of Bieber’s impressive junk that were published for the whole world to see. And just the other day ex-girlfriend Selena Gomez let it be known that she is experimenting with her sexuality.

SelGo has been getting the motherlode of press attention lately – and most of it is glowing. Her red-hot CD “Revival” was just released and Bieber’s CD “Purpose” won’t hit until November 13. And let’s not forget Selena Gomez dropped the bomb that she has been diagnosed with lupus and underwent chemotherapy.

What’s up with Justin Bieber lately? Is he drinking again – smoking dope? Was he just trying to grab some of the spotlight away from SelGo? This latest weird behavior leads us to believe Justin has gone back on his promise to be a better role model for his fans.

Let us know what you think in the comments section below and don’t forget to come back to CDL for all your celebrity news, rumors and gossip!