Selena Gomez’s Battle With Lupus And Chemotherapy: SelGo In Denial, Not Taking Care Of Herself? 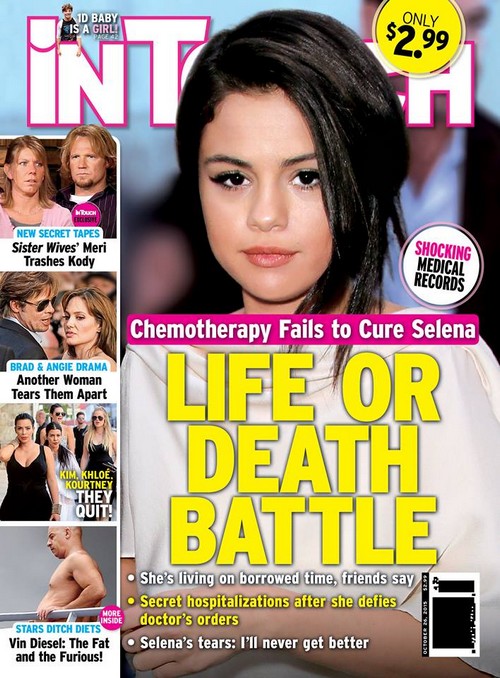 Selena Gomez finally confirmed that she suffered from Lupus in a recent interview – rumors have been floating around for years that SelGo had the disease, however she never addressed them. Selena also revealed that during her tumultuous relationship with Justin Bieber, she actually underwent chemotherapy treatments to help her fight Lupus. Selena insists that her health is on the up and up now, but according to this week’s cover of In Touch Magazine – that might not exactly be true.

In Touch Magazine features a photo of Selena Gomez on the cover this week and the headline screams, “Chemotherapy Fails To Cure Selena: Life Or Death Battle!” In Touch’s cover goes on to tease that SelGo is “living on borrowed time,” has been secretly hospitalized more than once, and the singer is terrified that she will “never get better.”

In Touch Magazine somehow obtained some of Selena Gomez’s medical records, and got some insight from a specialist on the singer’s medical condition and her fight against Lupus. According to the magazine’s source, “In my experience…patients who undergo chemotherapy for treatment of lupus usually have organ-threatening disease. With organ-threatening lupus, you have subsets that are particularly harsh and can lead to death.”

According to In Touch, Selena’s biggest problem is that she seems to be in denial and has a tough time following the doctors’ orders. We’re going to assume that all of the late night partying and extreme weight gain and weight loss are not wise choices for someone who has been diagnosed with Lupus. A concerned pal of Gomez’s dished to the tabloid, “She just needs to realize that she has a life-threatening disease and needs to calm down and stop all this—before it’s too late.”

Are you as shocked by the severity of Selena’s disease as we are? Do you think that her health could get worse if she doesn’t start taking better care of herself? Share your thoughts in the comments below!