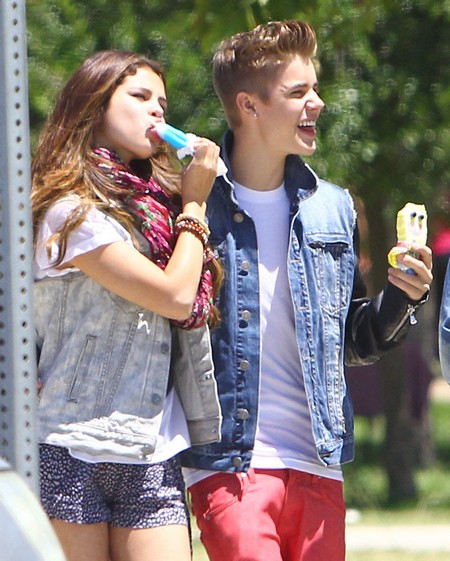 Poor Selena Gomez is furious. Selgo has had a tough run of it lately and now Justin Bieber is hooking up with mom of three Kourtney Kardashian. News just broke that Selena had to have chemotherapy for her lupus and now the long standing love of her life is banging a Kardashian, not Kylie or Kendall however, Beibs is hooking up with the eldest sister, Kourtney!

Looks like Justin decided he was not ready to “come and get it” and has chosen the eldest Kardashian for a MILFtastic new romance which has Selena angry and confused. Will all this angst cause Selena’s lupus to flare and send her back into the depths of her illness?

Justin Bieber recently said the reason he and Selena Gomez flopped as a couple is that they got too serious too soon and were essentially living like a married couple as teens. That makes sense until you see Justin Bieber romancing Kourtney Kardashian and hanging out with her kids. That’s way more serious than two 18 year olds cohabitating. That sounds pretty hypocritical, right? Poor Selena, maybe he’s just not that into you – and yet somehow into a woman 15 years older than him instead.

Notice that Selena Gomez and Kourtney Kardashian bear more than just a passing resemblance to one other. Both are exotic, golden-skinned beauties with ethnic features, big brown eyes, lush long brown hair, thick eyebrows and are short with curves. It’s like Justin Bieber went out and picked up the grown-up version of Selena Gomez for a hook up – and perhaps to spite Selena. Just a couple of weeks ago, Selena did an interview with Elle magazine saying that she might get back with the Biebs at some point.

What makes this all even more infuriating for Selena Gomez is that she’s in the middle of a big push for the launch of her new album Revival and was hoping all the relationship talk about her and Justin had died down for now. She wanted the focus to be 100% on her music. And now, Kourtney Kardashian has stolen Selena’s limelight – just like she stole her man. Of course, Selena and Justin were broken up, but we know Selena isn’t over him and has admitted she’d get back with him given time.

But has Selena’s window closed? Has Bieber decided this is more than just a hook up? Did this start as a bid to drive Scott Disick and Selena Gomez green with envy and is now much more? And how can Selena compete with the successful 36 year old mom? Also, is Selena upset that Justin wouldn’t help with her struggle with lupus but is playing step-dad to Kourtney’s three kids with ex Scott Disick? Selena cannot be happy with this Justin Bieber-Kourtney Kardashian after hours play date…

More on this story as it develops.

Selena Gomez and Justin Bieber back in day – FameFlynet