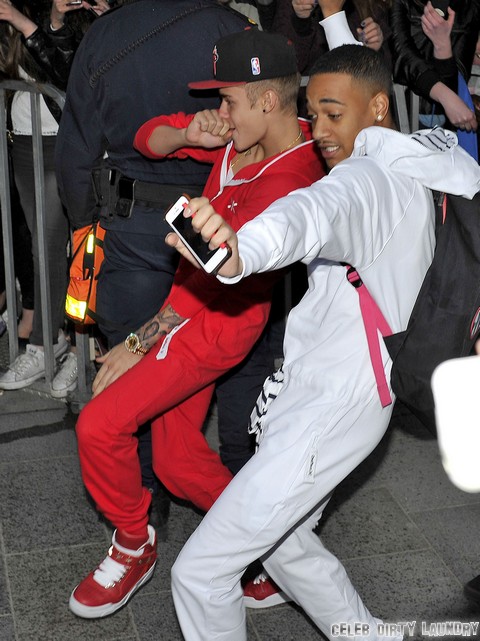 Justin Bieber’s buddies say that despite the fact that their friend was smoking weed and drinking up a storm on stage during his New Zealand concert the Biebs is sober. Riff Raff and Diplo were out on the town with the singer right before he went on tour and he wasn’t drinking and smoking at all?

Here’s what happened – the rappers were hanging out in the studio with Bieber and doing some work on Riff Raff’s “Pink Panther” LP the week before Justin went on tour. Riff Raff admits to being “f***ed up” but Justin was sober – TMZ got the scoop and posted an exclusive video on October 4. In the video Bieber and Riff Raff are in a car on the way to the clubs to celebrate – and Justin does appear to be sober.

If Justin has maintained his sobriety as his rapper buddies say he has – why was the singer was drinking Hennessey straight out of the bottle and smoking weed on stage during the concert? Riff Raff says that his pal may have fallen off the wagon that night, but HE believes it was a one-time thing. Maybe Justin just got caught up in the moment and went right back “on the wagon” the very next day?

What explanation can be offered for his behavior just a few nights before the concert in New Zealand? The media reported that not only had Justin made fun of a young woman who was roofied at HIS party – he also got booted from the Playboy Mansion after groping a model. Sure sounds sober, doesn’t it?

Fans can make all the excuses they want for Justin Bieber’s behavior – they’re blame his ex-girlfriend Selena Gomez for his crazy behavior – but Justin isn’t following up on his promise to be a better role model and his assurances that he has put his partying days behind him. Nope – nothing seems to have changed! It’s right back to the same old same old.

The “What Do You Mean” singer has denied any current relationship with Selena. SHE won’t stop talking about their break-up in interviews, but HE says he’s dating someone new and is O-V-E-R Gomez. But is this true? Is Justin Bieber over Selena Gomez? Something has to be going on – is it just that fame has gone to his head again? Which one is it – or is it a combination of both? Let us know in the comments below and don’t forget to come back to CDL for updates on the Biebs as well as all your celebrity news, gossip and rumors.