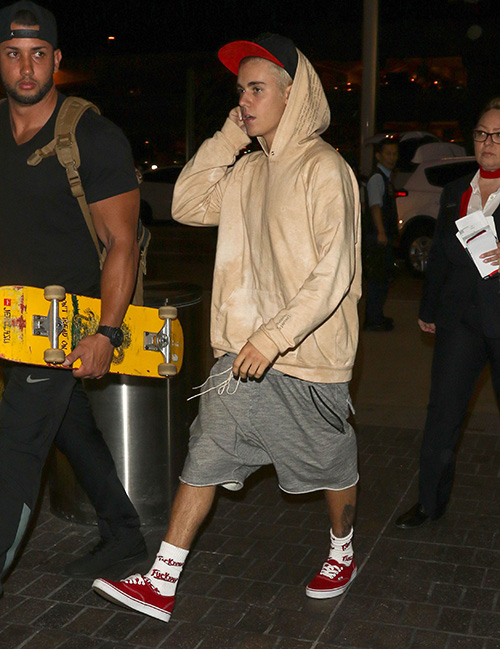 Justin Bieber is spinning out of control – and doing drugs on stage?! The new and improved Justin Bieber has come and gone. Biebs “turned over a new leaf” in 2015, and promised to better himself and become someone that his young fans could look up to. He released his apology video, basically saying sorry for every douchebag moment he had since 2012, and then went into several interviews vowing that he was a changed man and was ready to put his partying and disrespectful behavior behind him. Justin’s new song “What Do You Mean” has been wildly successful – and it looks like the success is going to Justin’s head and he is reverting back to his old ways.

According to a new report from Naughty Gossip, Justin recently took the stage in New Zealand for a performance. While he was on stage entertaining his fans, the website reports that he was smoking weed (yep, he pulled a Miley), and sources also claim that he was drinking Hennessey straight from the bottle during the concert as well. An insider dished to Naughty Gossip, “He is falling apart again. He promised to clean up his act and return to the old Justin, but he just cannot help himself. This isn’t going to end well.”

Ironically, the news that Justin Bieber was smoking marijuana on stage comes just a few days after two back-to-back reports that he made fun of a girl after she was roofied at his party, and then groped a model at the Playboy Mansion and got tossed out. While some fans are blaming his ex-girlfriend Selena Gomez for his behavior, since she won’t stop talking about their break-up in interviews, Justin insists that he is completely over her and recently revealed in an interview of his own that he is dating somebody new.

Do you think Justin Bieber is spiraling out of control again, or was his new “good boy” act all that – just an act? Is Selena Gomez to blame for his sudden bad behavior? Let us know what you think in the comments below!