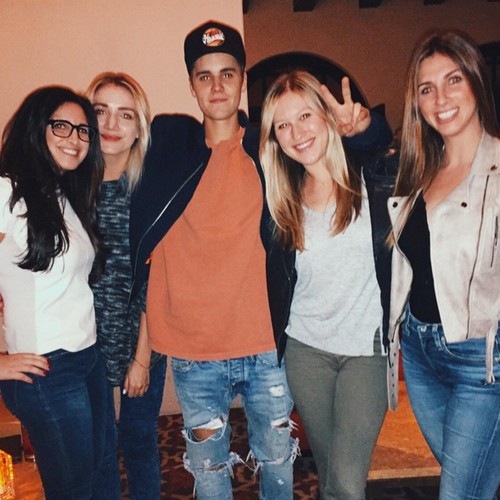 Are Justin Bieber and Selena Gomez reuniting? Did the couple go public dating with a piano bar serenade? Insiders from both Biebs and SelGo’s entourages’ have denied the singers are back together, but did Justin and Selena have a secret date night or was it another marketing ploy by the two pros?

While enjoying a night out a sharp-eyed fan caught what might be Justin singing “My Girl” to someone who could be Selena in a darkened piano bar on Thursday, November 20. The fan captured the serenade on video and posted it to Instagram.

The video is captioned, “@justinbieber singing my girl to @selenagomez…is this real? Pure magic.” Is it Bieber and Gomez? The young man wearing a baseball cap, presumably Justin, is sitting down, and singing. A dark-haired young woman, presumably Selena, is leaning on the piano a bit. Bieber stands up with a microphone and keeps singing – Gomez is no longer visible. A red light is flashing in the background – it looks like someone else is recording the Biebs rendition of “My Girl.”

Also posted to Instagram on the same account is a photo of four young women, two on each side of Bieber, with the caption, Photo cred: @selenagomez “[Justin] asked to sit at our table to chat, so impressed by the kindness (and realness!) of this guy tonight. Now a #belieber.” Is one to assume that the photo cred: @selenagomez means Selena Gomez snapped the picture of Justin Bieber with the ladies?

Selena has been promoting her new album “Revival,” and Justin has been doing the same for his new album “Purpose.” Neither one can stop talking about the other when interviewed. Bieber keeps saying things like SelGo was his first true love, Gomez keeps in contact with Biebs, etc. Selena’s has said that there will always be love for Bieber in her heart but it’s over.

Is it truly over between Selena Gomez and Justin Bieber? Is the video really the Biebs singing to Gomez? It looks like Bieber, but we can’t be certain that’s Gomez. The fan tagged both SelGo in the Biebs in the Instagram photo and video and credited Selena for the photo. Reunion or publicity stunt?

Let us know what you think in the comments section below and come back to CDL for all your celebrity news.

@justinbieber singing my girl to @selenagomez….is this real? Pure magic.