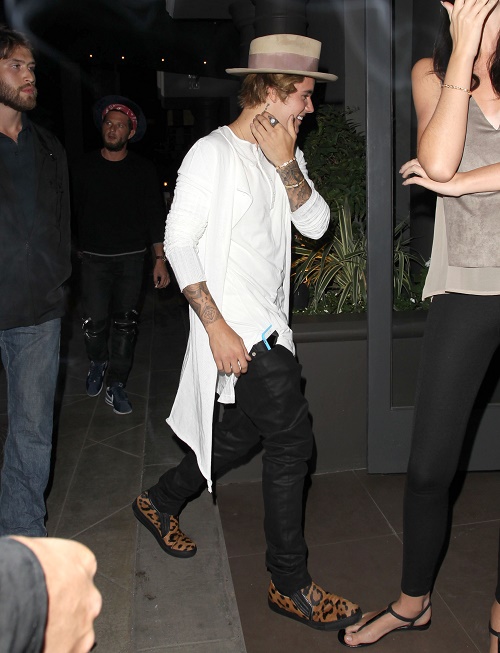 Justin Bieber was totally violated at Coachella and put in a chokehold by a security guard and humiliated by being tossed out of the music festival. Justin’s ex Selena Gomez is reportedly reaching out to Biebs after the traumatizing incident, and plans to take advantage of Justin’s Coachella misfortune and use it as a way to reconnect. It’s no secret that Selena Gomez is still in love with Justin, and fresh off her break-up with DJ Zedd, the “I Want You To Know” singer plans to get Biebs back – and this is the perfect opportunity.

On Sunday, April 12, Justin Bieber was partying hard with his fellow Brat Packers and headed over to Drake’s concert – but the singer was shockingly denied entry. Justin tried to march through the artist’s entrance, and had the wristband he needed to do so, but the staff told him the section was full and he would have to stand with the measly commoners and other partygoers. When Justin informed the staff that Drake had personally invited him and tried to enter the artist’s section anyways all hell broke loose and he was placed in a chokehold by security guards. Justin was reportedly hurt and furious about the way he was treated – and is considering pressing charges.

The irony of the situation really isn’t lost on us, after Justin Bieber and his security guards have reportedly manhandled people on more than one occasion – Justin got a taste of his own medicine, and he wasn’t a fan of it. But, none the less Biebs is totally traumatized over what happened at Coachella, and insiders say Selena Gomez has already reached out to him to “make sure that he is okay.” Our source close to the pop singer reveals, “Selena has made it very clear that she wants Justin back, and as soon as she heard what happened she contacted him. Selena knows how Justin operates, and exactly what to say to make him feel better and weasel her way back in to his life. Justin needs someone to baby him right now, and Selena is making sure she is that girl.”

Why on earth Selena Gomez would want Justin Bieber back is beyond us – but she is already laying down the groundwork and comforting him in his dire time of need. Do you think that Justin is being overdramatic about what happened at Coachella? Is Jelena going to reunite for the umpteenth time? Let us know what you think in the comments below!