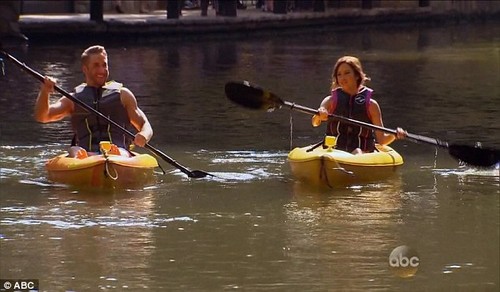 The Bachelorette 2015 Kaitlyn Bristowe and her winner Shawn Booth insist that they are getting married, and that there is no break-up in their near future. But, considering the track record of recent Bachelorette couples, we are skeptical – and so is Shawn Booth’s dad. According to a new report, Shawn Booth’s dad Steve thinks that Kaitlyn and Shawn’s engagement has a short shelf life as well – and that is never a good sign.

Shawn Booth’s own father knows the 2015 Bachelorette winner better than any of us do, and even he has little to no confidence in Shawn’s relationship to Kaitlyn Bristowe – and he thinks that Kaitlyn is “too fickle.” An insider dished to National Enquirer, “’Steve said, ‘What the hell’s going on? This is nuts!’ Steven was not a happy camper about Kaitlyn and Nick, and he let his son know it. Steve is worried about this, because he’s in deep. He wants Shawn to be happy, but he’s worried Kaitlyn is too fickle and flighty. Shawn said his dad’s definitely a bit of a skeptic, but he values his advice more than anyone’s in the entire world,”

Shawn Booth and Kaitlyn Bristowe are still doing a ton of press and interviews, and raving about their engagement and spending the rest of their lives together – just like Chris Soules and Whitney Bischoff were doing, and Andi Dorfman and Josh Murray were doing. For some reason Bachelorette fans seem to think that this couple is the real deal – even though they swore up and down that the previous couples who are now broken up were the real deal as well. Only time will tell, but frankly we would be shocked if Kaitlyn and Shawn actually made it down the aisle.

Do you think that Kaitlyn and Shawn will break up? Isn’t it a bad sign if even Shawn’s dad Steve has no faith in their relationship? Let us know what you think in the comments below!