Kaitlyn Bristowe and Shawn Booth Partying In NYC For Fashion Week: NOT in Love – Building Their Brand, Milking Celeb Status 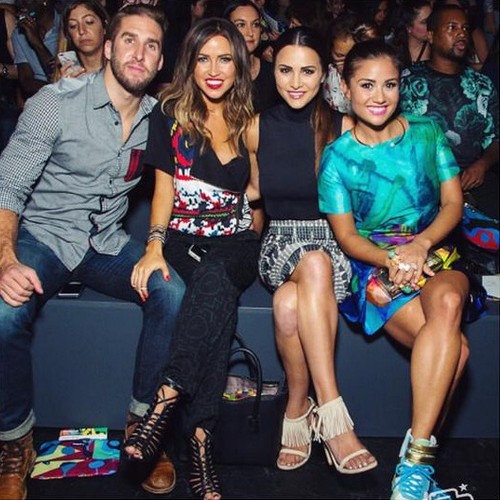 The Bachelorette Kaitlyn Bristowe and her 2015 winner Shawn Booth have been partying in New York City at Fashion Week, and taking full advantage of their fame and celeb status to gain access to some of the hottest runways and events. There has been a lot of speculation over Shawn and Kaitlyn’s relationship as of late – while the couple insists they are in love and getting married, it is beginning to look like they are following in couples’ steps before them and sticking it out so they can reap the benefits of being the latest couple to come out of Bachelor Nation. Fans on social media are asking how could Shawn possibly be in love with Kaitlyn after she slept with Nick Viall – just ask Andi Dorfman how that worked out for her and Josh Murray – there is also a buzz going around that Kaitlyn Bristowe is so in love with herself there is clearly no room there for anyone else!

Remember when Sean Lowe and Catherine Giudici were engaged? All they did was gush about their wedding plans, and they weren’t accepting every single invitation they received after The Bachelor finale. After their engagement they participated in the mandatory interviews that they agreed to in their contracts with ABC, and then they slipped out of the spotlight to plan their wedding and enjoy spending time together. Shawn Booth and Kaitlyn Bristowe seem to be doing the exact opposite of Sean and Catherine, and are taking more an of Andi Dorfman and Josh Murray approach to things. They aren’t building a relationship, they are building a brand – there is a big difference.

The fact that Kaitlyn and Shawn are attending every event and party they were invited to during New York Fashion Week is a pretty obvious sign as to where their priorities are at. If you are waiting for this couple to get married, don’t hold your breath guys. Unless ABC offers the million dollar contract they are banking on for a televised wedding – then they will probably be knocking people out of their way to get down the aisle.

Do you think Kaitlyn and Shawn are the real deal? Or are they just milking their fame and fortune for all it is worth, and well aware that if they break up they will have to kiss the perks of being the reigning Bachelorette couple goodbye? Speaking of perks, did Kaitlyn get an all you eat coupon for the lip filler clinic? Let us know what you think in the comments below!