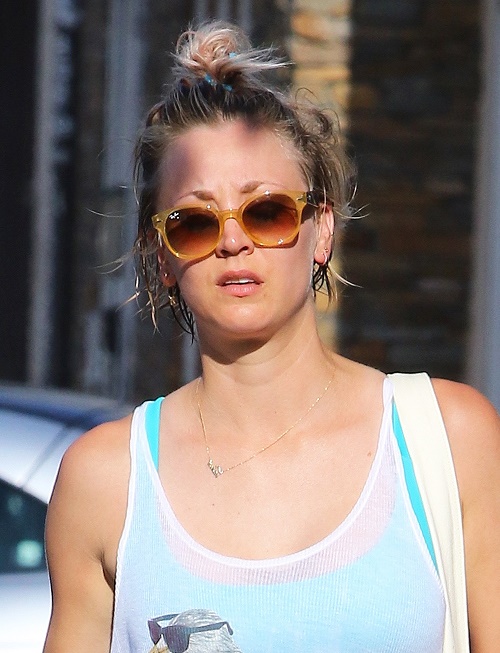 Big Bang Theory actress Kaley Cuoco Sweeting and her husband Ryan Sweeting are reportedly on the verge of a divorce. Apparently, their shotgun wedding and the fact that they were virtually strangers when they said “I Do” is finally catching up to them. Kaley probably should have spent a little more time getting to know her professional tennis player husband, then maybe she would have figured out that he was broke and would be supporting him with her Big Band Theory paychecks if they got married.

According to a new report from Star Magazine, money is a major issue in the Sweeting household – and Kaley gives her husband an allowance! Ryan Sweeting only grossed $200 last year playing tennis, and no that is not a typo. Kaley has been footing the bill for everything and it is starting to put a strain on their marriage. An insider dished to Star, “Ryan has a credit card which Kaley pays off each month. His friends tease him and tell him that it is like a tracking device so she can keep tabs on where he has been. Kaley goes through the bill with a fine-tooth comb because there are certain things she won’t let Ryan spend her hard-earned money on.”

We get why Ryan would feel like he has no freedom, seeing as how Kaley tracks his spending and where he goes every month. But freedom is pricey and if he wants to have any privacy he should probably go get a job and spend his own money how he pleases. At this rate, it will be a miracle if Kaley Cuoco and Ryan Sweeting’s marriage lasts the rest of the year. Then again, Ryan would have to be a fool to divorce Kaley. He’ll have to give back the credit card!

What do you think of Kaley giving her husband an allowance? Do you see a divorce in their near future? Does Ryan have any right to be upset about Kaley tracking his purchases, after all it is her money? Let us know what you think in the comments below!