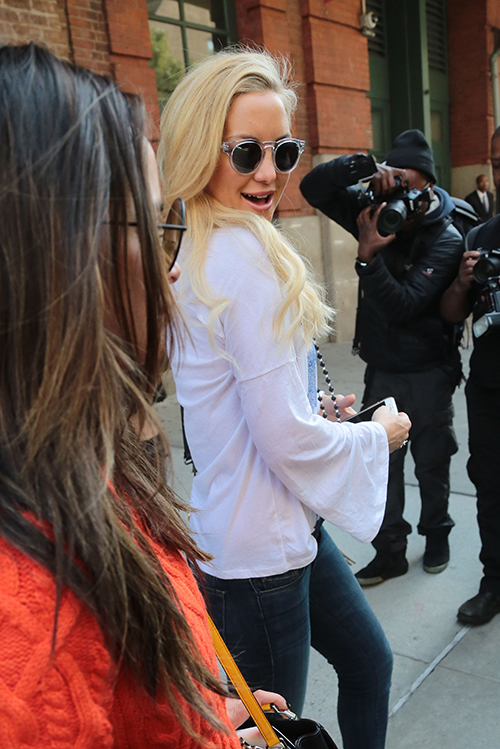 Cougar Kate Hudson has been in the midst of a media firestorm since she was spotted out on multiple dates with much younger pop singer Nick Jonas. While Nick kinda sorta confirmed he was dating Kate Hudson earlier this month and wouldn’t discuss their relationship because he doesn’t “like to talk about things that matter to him,” Kate has been mum about the hook-up rumors with the 23-year-old singer … until now.

Kate has been on a publicity tour promoting her new movie “Rock The Kasbah,” and on Tuesday October 20th she stopped by “What What Happens Live” for an interview with the Bravo host Andy Cohen. Of course, one of the first things Andy brought up was her relationship with Nick Jonas. And Kate’s response was definitely interesting. Kate didn’t confirm she was dating Jonas, but she wouldn’t deny it either – which we all know is basically a confirmation in Hollywood.

Andy raved to Kate, “No. 1! This is all I wanna know! Here’s my feeling: you are so hot! I have seen you in person now a couple times. You are so hot. Nick Jonas has been here a couple times. He’s so hot. I love it when hot people are together. It is my favorite thing! I hope something’s happening, even if it’s casual.”

Kate tried to sidestep the conversation by responding, “I don’t discuss gossip.” Hudson added, “Honestly, you can’t hug someone or talk to someone without it ending up being a thing.” She went on to point out that everyone also thought that she was dating her own agent because they held hands while walking through the paparazzi.

We totally get that the media blows things out of proportion, but c’mon Kate – we’re pretty sure spending an entire weekend in Florida with somebody is a little more than a “thing.” What do you guys think? Did Kate Hudson just confirm she was dating Nick Jonas? If the rumors weren’t true – wouldn’t she have flat out said so? Let us know what you think in the comments below!