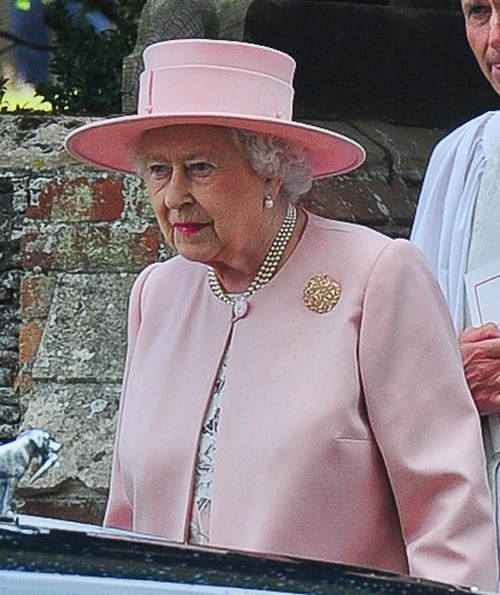 It’s pretty obvious Kate Middleton and Queen Elizabeth are at war. From the meddling Middleton matriarch, Carole Middleton, to Kate’s arguably lazy lifestyle, the Queen isn’t happy and it looks like she will continue to retaliate in response to the Duchess of Cambridge’s behavior.

Lazy Katie and Duchess of Do-Little are just two pet names Queen Elizabeth has bestowed upon Kate Middleton, according to news outlets like AOL. In private, the Queen freely airs out her grievances regarding the Duchess’ lazy habits. It would appear Kate is lazy, seemingly cherry-picking which events she deems worthy of her presence. Most recently, the Duchess of Cambridge opted to skip a lunch for World War II pilots, but had the energy to attend Wimbledon and host Brad Pitt and Angelina Jolie for a tea during the same time period.

Another debate the Queen and Kate clash over is the Duchess’ choice in clothing. While anything Kate wears usually sells out faster than all the Pabst at a Nascar race, Queen Elizabeth isn’t a fan of Kate Middleton’s fashion choices. According to Variety, the Queen hates it when Kate dons wedge shoes. In addition to the offending footwear, the Duchess’ hemlines are too high for Queen Elizabeth’s royal standards. Britain’s Mail on Sunday revealed the Queen demanded Kate’s style get a conservative makeover in 2014. The Duchess obliged, donning knee-length dresses during public events, but she still favors her skin-tight jeans whenever the Queen is absent.

Perhaps, the real problem is the March of the Middletons. Carole Middleton has been dominating Anmer Hall, making changes to royal traditions with Kate leading the charge in the face of Queen Elizabeth. Instead of a large staff of nannies, the Duchess insists on being a stay-at-home-mom, which gives Carole and Kate the upper hand of influencing Prince George and Princess Charlotte.

The middle class lifestyle has long upset the Queen, but it appears her tolerance has hit a breaking point. Rumbles from royal insiders claim the Middletons are preparing for a war with Queen Elizabeth. Kate and Prince William opted to throw Prince George a low key birthday party at Anmer Hall for the tot who just turned 2. The Queen retaliated by snubbing the event, sending Prince Philip in her place. The Middleton family read between the lines, and know Queen Elizabeth isn’t happy.

The Middletons have done an amazing job cementing themselves as part of the royal family. They have managed to insert themselves front and center of Kate and Prince William’s lives. The Middleton’s changes to royal traditions are beneficial for the middle class royal revolution, but at what cost?

Thanks to the Clarence House’s annual review, shared by People, it was revealed the Duke and Duchess get a multi-million allowance from Prince Charles. The royal couple saw an increase in cash over the last year, which conveniently accompanied the news Prince Charles was finally getting more time with his grandchildren. Will Prince Charles and the Queen squeeze Kate and William financially until they bend to royal ways? That’s just one option Queen Elizabeth has in her arsenal, and it appears Kate and Carole have gotten a warning of retaliation if Kate Middleton’s behavior doesn’t fall into royal standards.

What will be Kate Middleton’s next move in the feud with Queen Elizabeth II? Will the Duchess of Cambridge back down, or are the Middletons just beginning to fight? Let us know what you think in the comment section below.