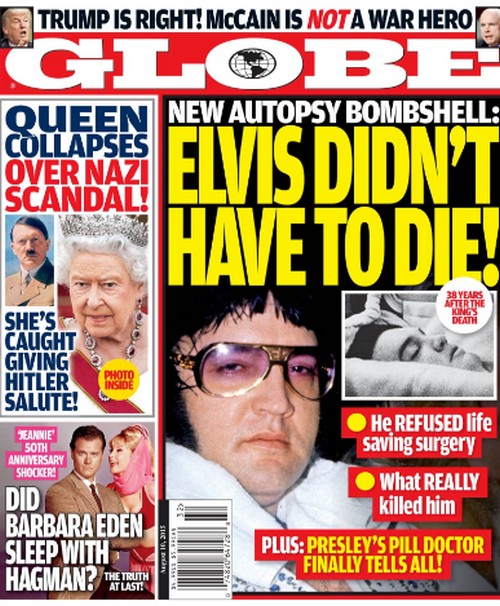 Queen Elizabeth found herself in some hot water last month when photos from 1933 were leaked to the public and they showed her majesty herself as a young girl giving the Nazi salute, along with her uncle, Edward, her mother, and her little sister Margaret. The photos themselves are devastating to any political leader’s image, but the Queen has some serious explaining to do after the royal family has vehemently denied for years their association with Adolf Hitler and the well-documented fact that some in the British Royal family were Nazi sympathizers and tried to cover this up after the Holocaust became public knowledge.

According to an all new report in this week’s edition of GLOBE Magazine, Queen Elizabeth did not take the scandal well – and she reportedly collapsed when she learned that the photos of her giving the Nazi salute had been leaked to the public. A royal family insider dished to GLOBE, “After the Nazi news broke, Her Majesty’s legs gave away and she crumpled in to a seat in her Buckingham Palace office. The blood seemed to drain from her face, she was struggling for breath. It was a good 45 minutes before she began to regain her strength. Everyone was so alarmed.”

Despite Queen Elizabeth’s deteriorating health, she is on a mission to clear her name before she steps down from the Throne. After decades of service to England, the last thing she wants to be known for was her family’s connections to Adolf Hitler and the Nazis. The Palace insider explained, “Queen Elizabeth is now focused on clearing her name before she hands the throne to Prince William and Kate.”

How do you feel about the photos that hit the Internet showing Queen Elizabeth doing the Nazi salute? Do you think that Camilla Parker-Bowles really has more damning evidence against the Royals? Will Queen Elizabeth be able to clear her family’s name? Let us know what you think in the comments below!