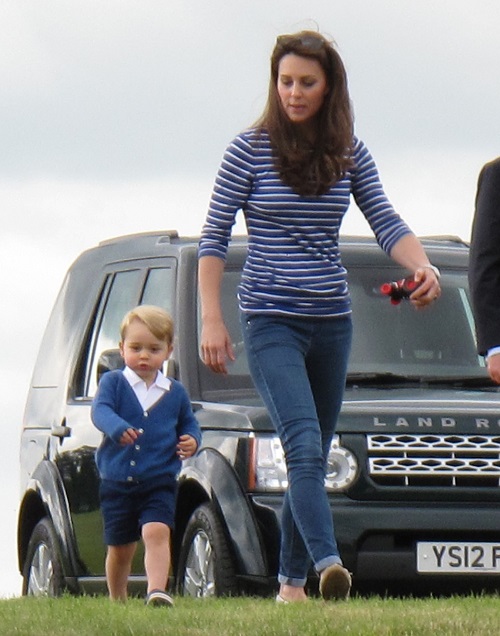 Kate Middleton just gave birth to Princess Charlotte and she has already shed her baby weight pounds! The princess was photographed at the 2015 Trooping the Colour ceremony and, more recently, attending the Gigaset Charity Polo Match at Beaufort Polo Club in Tetbury, England. Baby Prince George was by her side on both accounts and let’s just say he was looking royally adorable. He’s definitely budding into a royal prince who photographs well. Guess he truly does take after his mother and father.

One question on everyone’s mind is . . . how in the world did Kate manage to shed that baby weight so quickly? Princess Charlotte was born on May 2nd and already Kate’s managed to summon back her slim figure. Celebrities of course have their tips and tricks for slimming down after giving birth (Kourtney Kardashian’s known for power slimming after births) and while everyone’s body is different, there’s really only one way to get rid of that extra poundage: a combination of healthy diet and exercise. Or, of course, there’s a second option: Not eating (much) at all.

CDL reported not too long ago that Kate Middleton was placed on a very strict diet, one that consisted almost entire of juiced greens. Pair that with the exercises her trainers probably had her doing and, well, you’ve got a recipe for a Post-Baby Six Week Slim Down – Royal Version. To us, this just sounds like a living hell (and never-ending days of lightheadedness), but when you have the Queen of England harping on you to get back into the spotlight and continue your royal duties, the pressures of looking your best are great.

So now that Kate has emerged from Amner Hall and is smiling once again for the cameras of the world, how do you think she looks? As good as ever, we’d say! Make sure to check out the adorable photos of Kate and Prince George at the polo match. How quickly that little prince is growing up!