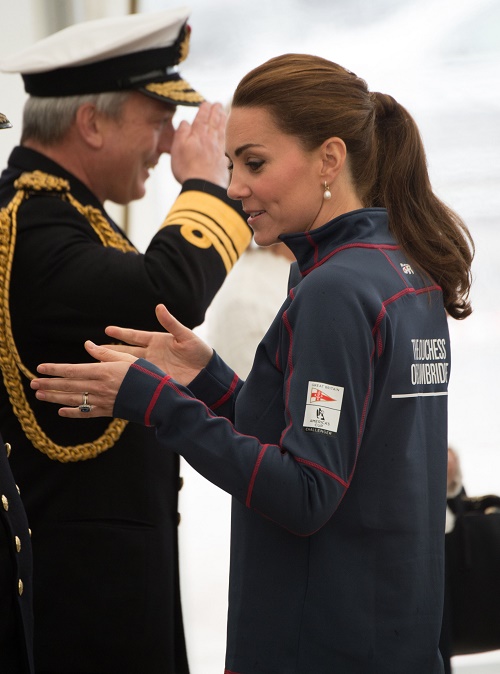 Kate Middleton is caught in the middle of a royal family battle that has been brewing for years. Prince Charles is finally fighting back against Carole Middleton and the march of the Middletons. While the Duchess of Cambridge’s family oversteps boundaries, Charles and Queen Elizabeth are taking measures to stifle the royal revolution.

Fresh photos of the adorable Prince George surfaced after his Middleton-heavy second birthday party. The images of the royal toddler show George having fun on the beach with his favorite grandma, Carole Middleton before his party. Prince George spent the bulk of the afternoon with Carole, contradicting the royal tea he had with Queen Elizabeth before his first birthday party. The beach trip is just one of many public outings Carole Middleton and Prince George has been photographed enjoying. In early July, Carole took George to Bucklebury Farm Park in Berkshire.

According to reports by Hello! magazine, Prince Charles is not going down without a fight. As Carole dominates the lives of Kate Middleton, Prince William, Prince George, and Princess Charlotte, the future King was standing by simply complaining he never got to see his grandson. Now, things are changing. Prince Charles has finally put his foot down, or more likely had Queen Elizabeth put patent leather heel down, and enjoys more time with Prince George and Princess Charlotte.

After being unable to attend Prince George’s second birthday party, effectively appearing snubbed, the Duke and Duchess of Cornwall reportedly spent the following weekend at Anmer Hall, according to the Daily Mail. The birthday weekend followed outings in Prince Charles’ garden, where he and Prince George planted trees at the country estate. Rest assured, Carole Middleton made sure she spent plenty of time before and after Charles and Camilla Parker-Bowles weekend with the family.

To gain more favor with Prince George, Prince Charles has also had the treehouse at his Highgrove estate restore. The “hideout” was built for Prince William when he turned 7, reportedly telling the architect crafting the house, “I want it to be as high as possible so I can get away from everyone and I want a rope ladder which I can pull up so no one can get at me.” In addition to rebuilding the treehouse for Prince George and, someday, Princess Charlotte to enjoy, Charles had an “incredible artisan shepherd’s hut” built for his royal grandchildren courtesy of the Plankbridge company.

Then there is Pippa and James Middleton. The sister and brother of Kate Middleton are constantly sponging off of the Duchess’ status. Most recently, Pippa attempted to get herself on ‘Dancing With the Stars.’ You can bet Queen Elizabeth will do everything in her power to prevent that from happening. Honestly, I’d be surprised if Carole Middleton would allow it, as it would threaten Kate’s position and image.

Carole Middleton clearly calls the shots in Kate Middleton and Prince William’s life, helping Kate navigate and manipulate the royal system. Perhaps she didn’t count on Prince Charles fighting back. What do you think Carole and Kate’s next moves will be? Will she allow Prince Charles to cut in on her time and position of influence over Prince George and Princess Charlotte? Let us know in the comment section below.