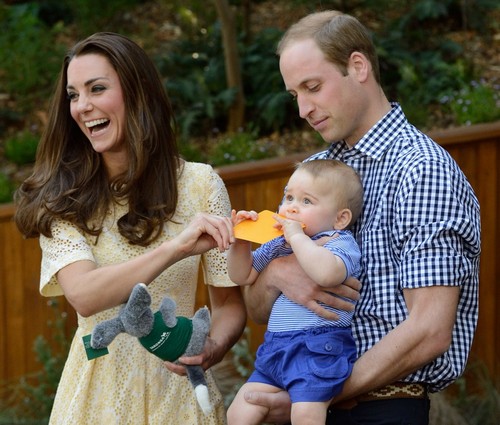 Kate Middleton is rejoicing in her maternity leave and has spent the last month after giving birth to Princess Charlotte recovering at Anmer Hall. On Sunday morning, the Duchess of Cambridge continued to relish the middleclass lifestyle and enjoyed a park play date with Prince George in spite of the Queen’s protests.

It’s not a secret Queen Elizabeth isn’t a fan of the Middleton family. There are countless stories about Carole Middleton offending the Queen with her “middleclass” ways. Most recently, Carole Middleton beat the Queen to Kate’s side after the Duchess gave birth and met Princess Charlotte Elizabeth Diana first.

The royals have a penchant for pushing out the commoner families of those who marry into royalty. Carole Middleton is making sure she and the rest of the Middleton family, including Michael, Pippa, and James, all have a secure spot in the family to the point it defies Queen Elizabeth. In fact, Prince Charles and Camilla Parker-Bowles seem to be the ones slowly being ousted. Rumors claim that Charles often complains about how little he gets to see his grandson, Prince George. To make matters worse, it appears that Prince Charles has only seen Princess Charlotte twice. Both of those visits were made shortly after Kate gave birth and the royal couple temporarily returned to Kensington Palace.

Kate Middleton seems to be on board with the royal revolution. Carole and Kate have quietly been making changes including ensuring Prince George and Princess Charlotte enjoy a “normal” childhood. That includes visits to public parks, playdates with friends, and spending ample amounts of time with family instead of being under the constant care of a nanny.

Queen Elizabeth has been rumored to protest the “commoner” lifestyle and blames Carole Middleton for meddling. The Queen believes the children should be raised in a more regal lifestyle, so the royal children will know what is expected of them. Perhaps Queen Elizabeth fears a repeat of Prince Harry’s naked shenanigans in Vegas?

The Duchess appears to be standing her ground. Kate Middleton surfaced in London’s Holland Park with George. While Kate and George have been spotted playing on the swings near the royal couple’s home at Anmer Hall, this park playdate marks one of the first occasions Kate has been spotted blending in with the public since she gave birth.

George loved the mommy and son time. An onlooker described the playtime as fun for both royals. “It looked like she was pretending to be a monster, flailing her arms about and chasing him. She was play-acting just like all mums do and he was running around loving it – he looked very happy,” the witness explained. “He looked like such a happy lad, being chased by his mom and enjoying the swings, slides, roundabouts – they were going on everything. They looked just like any other mom and toddler.”

It looks like Kate isn’t letting any of the Queen’s pressure get to her. Queen Elizabeth’s birthday celebration is quickly approaching and rumor has it, the Duchess is being pushed into ending her maternity leave early and attending the celebration. July will be a busy month for the royals. Prince George’s second birthday will be July 22, and more rumors claim that Kate Middleton is attempting to plan Princess Charlotte’s christening next month to ensure Queen Elizabeth is present before leaving for Scotland.