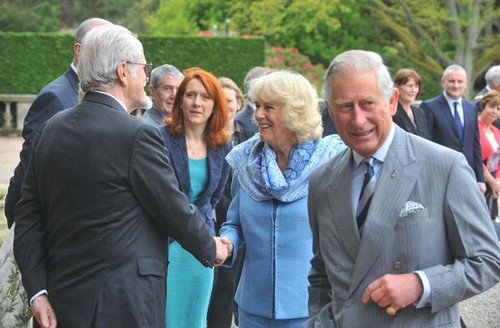 Kate Middleton and Carole Middleton might have already begun planning Princess Charlotte’s first birthday party. It should be quite an event, judging by the bash the royal couple put together with the Middleton family at the helm, but will Prince Charles and Camilla Parker-Bowles be snubbed again?

The entire Middleton family, including Kate’s siblings James and Pippa, were in attendance. Prince Harry was also present with Prince George’s godparents, Jamie Lowther Pinkerton, Emilia Jardine Paterson, and Zara Phillips. Even Julia Samuel, a confidante of the late Princess Diana, also attend. Queen Elizabeth arrived at the party after Kate Middleton drove George out for a special visit a few hours before the festivities. The Queen only stayed at the Peter Rabbit themed party for about 50 minutes according E!

Carole Middleton is currently running the show at Kate and William’s home, Anmer Hall. The Party Pieces owner will be there for at least another month, securing her role as matriarch. Carole’s influence and constant presence has royally angered the Queen, who feels Prince George and Princess Charlotte should have a more regal upbringing. Both Kate and Carole have made changes to archaic traditions and adopted and more casual, relaxed atmosphere at the Sandringham estate. One of the first changes the Middleton’s made was instituting a more common ground with staff, insisting everyone be on a first name basis. Despite Queen Elizabeth’s displeasure, the practices continue and it’s evident that the Middleton’s won’t be changing to please the Queen.

Thanks to Carole’s recent published article on children’s parties in Little London, we can get a peek inside Princess Charlotte’s first birthday party. Putting pen to paper and standing by her commoner values that have been labeled as “middleclass,” Middleton wrote an article focused around the theme that kid’s parties don’t have to be diamond-studded events. “We’ve always believed that parties do not have to be lavish and expensive occasions, and it’s amazing what you can achieve by being clever and creative,” Carole insisted. “There are few bigger draws for children than bouncy castles,” Middleton continued before adding that the cake should be the centrepiece of the party. Note the contrast to the typical Royal children’s birthday party where the adults stand around drinking gin and tonic and the kids sit politely and quietly, attended to by their nannies.

It sounds like Prince George’s second birthday party will be a blast, and Princess Charlotte can look forward to a bouncy castle in the near future. But, will Prince Charles and Camilla Parker-Bowles be conveniently busy elsewhere again? It wouldn’t be a surprise if Kate Middleton, with Carole Middleton by her side, is crossing her fingers Charles and Camilla “The Other Woman” Parker-Bowles will be out of the country again.