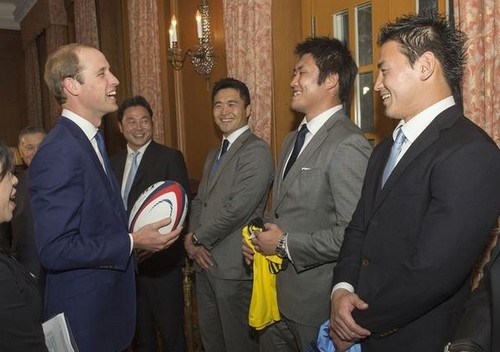 Kate Middleton is just 6 weeks away from giving birth, but it seems like all the royals are conveniently forgetting that – including her own husband, Prince William. Prince William has just landed in Japan for a four-day tour, while The Duchess of Cambridge stays back in England, getting more and more pregnant, bloated, and hormonal. What a loving, caring husband, no?

Look, we get it – the royals have obligations they can’t get out of, and with all the royal scandals plaguing the news lately [cough, Prince Andrew’s underage sex scandal, cough], the Kensington Palace press office has been working overtime to guarantee good press for the family – and the majority of their ‘good’ press comes from Kate Middleton’s pregnancy and Prince William’s public appearances.

But even then, you’d think that Will would put his foot down and insist that he spent the last month of his wife’s pregnancy WITH her, not traveling to Japan and China on a foreign tour. When your wife is pregnant and due to give birth in six weeks, do you travel to another continent for something that could really wait an extra few months? For all intents and purposes, Kate is already exhausted from the endless appearances that the royals are already engaging her in. And now, she doesn’t even have the backing of her husband to say that she just wants to rest. Imagine that Kate ends up giving birth early – there’s a possibility that Prince William could even miss the birth! I mean, it’s not like we’re months and months away from Kate Middleton’s due date anymore, and premature births at this date are very possible.

What do you guys think? Is Kate Middleton angry at Prince William for going to Japan six weeks before her due date, or does she understand that he doesn’t have much of a choice? Sure, he could put his foot down and try to argue, but you know that neither Kate nor William truly have that much say in what they do.