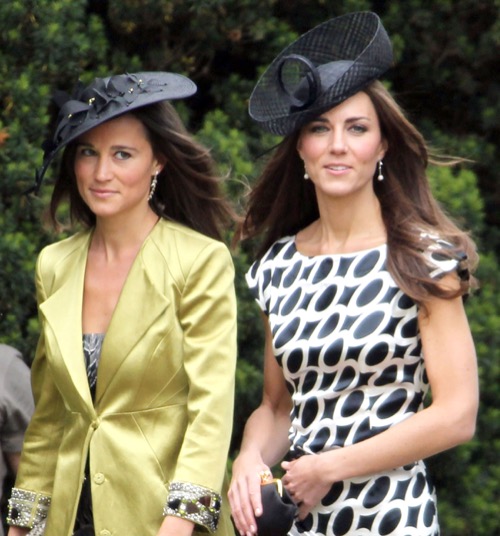 Kate Middleton has created an organic food line for children, but it appears the concept is more than just a sustaining venture for Kate, it gives Pippa Middleton a job. Looks like the Duchess of Cambridge is stepping in to save her sister’s failing career and the move makes us wonder, is Pippa broke?

It seems Kate’s brother and sister, James Middleton and Pippa Middleton, don’t seem to have the same knack for success that Carole Middleton possesses. Carole began as a flight attendant who worked her way into a successful business venture. Party Pieces grew into a fruitful mail order company that gave the Middletons a very comfortable lifestyle. Thanks to Carole’s drive, Kate Middleton was able to bag Prince William after switching universities and waiting a year to coincide with the heir to the throne’s arrival at St. Andrews.

However, James and Pippa haven’t had the same luck. James has several failed cake-focused companies, while Pippa attempted a career in public relations. After several jobs, including working as an events manager for London-based company that focuses on catering to corporate events, Pippa tried her hand at writing. Her first book on party-planning turned out dismal sales after critiques slammed the tome as obvious and unhelpful. Since then, Pippa has bounced around from writing articles for several media outlets and returning to help with her parent’s Party Pieces company.

Now, Kate Middleton is heading a project that will be attached to their estate, Anmer Hall. It’s actually a wise move. Prince Charles has a Duchy Originals line sold in Waitrose supermarkets that features 200 products like bacon, beer, and jam. The venture has generated funds to support the royals and their charitable causes.

Coincidently, Pippa is studying to become a nutritionist. Kate’s sister started yet another career path in May 2015, just before Kate and William came up with the organic food line. The Daily Mail confirmed Pippa is “loosely” involved in developing the line behind the scenes. It will likely stay that way, as Pippa doesn’t seem to have the touch of success Carole and Kate have. Together, Kate and Pippa have created a “grow-your-own vegetable kit” that will be available in the Anmer Organics range.

Is Kate Middleton bailing her sister out of a career slump? It wouldn’t be the first time the Duchess came to the financial rescue of the Middletons. As CDL covered, James Middleton’s floundering career and Carole Middleton’s cake endeavors have all received aid from Kate and Prince William.

What do you think of Kate Middleton giving Pippa Middleton a job? Is Pippa broke and the Duchess of Cambridge is trying to help her sister? Let us know your thoughts in the comment section below, and keep checking back for more royal news and gossip!