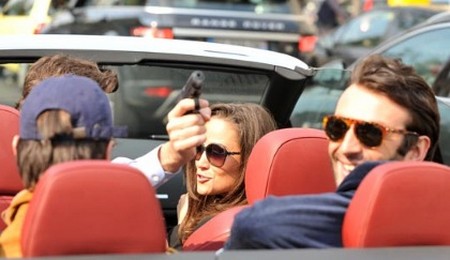 Princess Charlotte Elizabeth Diana is here! Prince William and his wife Kate Middleton spent nine months arguing with the royal family over what they would name their new baby girl. On Saturday May 2 the Duchess of Cambridge finally went in to labor and gave birth to a healthy baby girl – which they recently announced has been named Charlotte Elizabeth Diana. As expected, the Princess’s new name is raising a few eyebrows at the Palace.

Prince Charles and Kate Middleton have been feuding for months over the Duchess’s commoner family and their ongoing presence in Prince George’s life – Charles feared that once the new baby girl was born Carole Middleton would take over her upbringing as well. One would think that Prince Charles would be pleased that his granddaughter is named Charlotte, which you could easily argue is a female derivative of Charles. But, Charlotte is actually Kate’s scandalous sister Pippa Middleton’s middle name – so in all actuality Kate and William named their baby girl after a commoner! Pippa’s name is Philippa Charlotte Middleton, coincidence, no way!

The royals are already furious that Kate and William threw Diana’s name in to their daughter’s name – but the fact that her first name is after Kate’s commoner sister is just pouring salt on the wounds. The Middleton Family has clung to Kate and road her coattails since she married in to the royal family, and Prince Charles and Queen Elizabeth have made it very clear that they don’t want the commoners to have such a presence in the royal heir and the new spare’s lives.

Naming Princess Charlotte after her commoner Aunt Pippa is definitely not putting any distance between the royals and the Middletons – if anything it is just bounding them for life, and giving Carole Middleton even more reason to infringe on the royal family. Carole Middleton had already let it go to her head that her grandson is a Prince, we can only imagine how she plans to use the fact that the Princess was named after a member of her family to boost her own celebrity status.

What do you think of Kate Middleton and Prince William’s baby girl’s name? Do you think Charlotte is after her Aunt Pippa? Or was it intended to honor Charles and a mere coincidence that it is Pippa’s middle name? Is the royal family over-reacting, or do they have reason to be concerned that the Middletons have such an active role in Prince George and Princess Charlotte’s lives? Let us know what you think in the comments below!