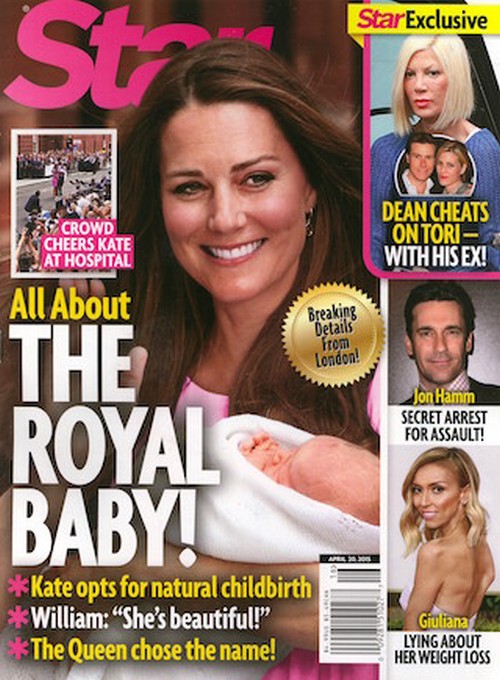 Pregnant Kate Middleton’s due date is just a week away, although it was originally rumored to be April 20, a recent press release revealed that the media will be setting up camp at the hospital where the Duchess will be giving birth on April 15. Prince William and Kate Middleton’s baby girl has not arrived yet – but the recent cover of Star Magazine is implying that the Duchess of Cambridge has already given birth. And, Prince Charles is furious because Kate is packing the baby girl up and moving her to Bucklebury Manor to live with her commoner family, The Middletons.

The April 20 cover of Star Magazine features Kate Middleton holding a baby and smiling ear to ear, no doubt an old picture of her holding Prince George. The headline screams, “All About The Royal Baby: Kate opts for natural childbirth, William says ‘she’s beautiful,’ The Queen chose the name!” We’re not entirely sure how Prince William can announce that the baby girl is beautiful when she isn’t here yet, but technology has come a long way and 3D sonograms are all the rage.

This week’s edition of Star Magazine goes on to say what CDL has been reporting for weeks, Prince Charles and Kate Middleton are engrossed in a bitter feud over the commoner Middleton’s influence on his royal grandchildren. Prince Charles is not happy that Kate’s mom Carole Middleton has monopolized all of the grandparent duties – and he hates that Prince George and his future baby sister are growing up surrounded by commoners and not being raised as Royals. Kate Middleton has opted to go live with her mother Carole at Bucklebury Manor with Prince George and his baby sister – once she is actually born, and Prince Charles is furious.

Are you excited for Kate Middleton to give birth? What do you think she and Prince William will name the baby girl? Do you think that Kate should accept the fact that she married a prince and her children are Royals and need to be raised that way – or is it admirable that she goes against the Royal’s wishes and lets the Middletons spend so much time with Prince George? Let us know what you think in the comments below!