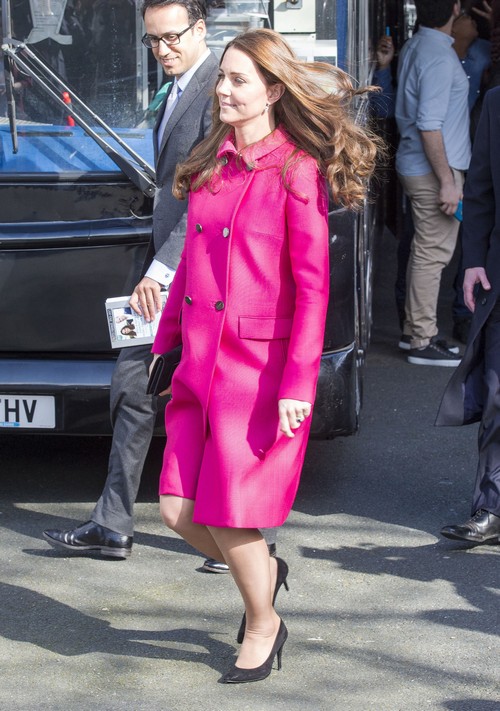 Kate Middleton has already confirmed she will give birth “middle to end of April,” but rumors claim Middleton’s changed due date could mean pregnancy complications. Everyone is preparing for the Duchess of Cambridge to give birth, and St. Mary’s Hospital in Paddington has security and a team doctors ready to welcome the royal couple’s baby girl.

The first expected due date was April 20, but as we reported, media was told to arrive and set up gear at “midnight on April 15.” Rumblings of complications and a scheduled cesarean followed the date change, but there have been no signs of distress. Celeb Dirty Laundry has kept a close eye Kate Middleton and the Duchess has seemed upbeat and healthy while making her last public appearances. Middleton was even photographed laughing during a picture with the guardsmen during the St. Patrick’s Day celebration.

Kate did endure hyperemesis gravidarum during the first few weeks of her pregnancy, but the affliction doesn’t usually carry on past the 14-week marker according to Dr. Peter Bernstein, a maternal-fetal medicine specialist at Montefiore Medical Center in New York who spoke with Today. Hyperemesis gravidarum is similar to morning sickness, but far more severe and can lead to dehydration and weight loss. The Duchess was treated at Kensington Palace and recovered well.

In fact, two “elite” doctors have been taking care of Kate Middleton and will deliver her baby girl. People revealed royal doctors Alan Farthing and Guy Thorpe-Beeston will be in charge when Middleton gives birth. Both Alan and Guy are surgeons who were part of the team helping the Duchess give birth to Prince George. The royal medical staff is also familiar with Kate’s pregnancy complications, treating her for the severe morning sickness complications. A neonatologist, anesthetist, and a small team of midwives will all lend a hand as Guy Thorpe-Beeston will be the primary obstetrician who will lead the delivery at St. Mary’s Hospital. Guy also specializes in managing high-risk pregnancies.

Prince George was born in the same west London hospital. Kate and Prince William were tucked away in the in the private Lindo Wing nearly two years ago for George’s delivery. St. Mary’s Hospital was refurbished in in 2012, just in time for Middleton to give birth to Prince George Alexander Louis of Cambridge.

Security for Kate Middleton, Prince William, and the royal family will be intense. With Islamic terrorism on the rise, keeping Kate and the baby safe will be a top priority. Multiple security sweeps will take place before and after the Middleton arrives. While Kate was in labor with Prince George, there was minor security breach after a radio station managed to call the hospital and convince the staff the Queen wanted to speak with the Duchess’ nurse. They were patched through despite their terrible impression of her highness, and the nurse revealed several confidential details about Middleton’s condition. The nurse later killed herself (she had a history of mental illness) putting a damper on the entire royal birth.

Security will be tighter this time. Even the waiting media will even have stricter rules to follow. Positions will be assigned, and police will be handling any problems with a firm hand. Reporters and camera crews were also informed if they show up to St. Mary’s hospital before Kate Middleton is admitted or before April 15 at midnight, police will escort them away.

One important royal might be missing at the birth of Kate Middleton and Prince William’s second child. Prince Harry is due to spend most of April in Australia with the Australian Defense Force. Harry will be reporting for duty during a four-week stint in Darwin, Perth, and then Sydney for training purposes. On April 24 and April 25, Prince Harry will then rush off to Turkey to join Prince Charles for the Gallipoli commemorations.