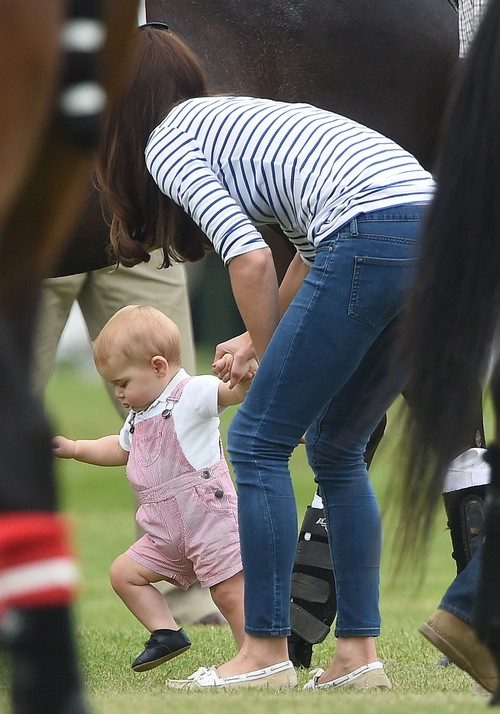 Kate Middleton’s second pregnancy is as highly anticipated as her fist, but Kate is taking what she learned from giving birth to Prince George and putting it to use. Kate Middleton has chosen to stay with her new baby girl as long as she can, enjoying a long maternity leave, before returning to royal duties and spotlight after giving birth to her daughter in April. The Duchess of Cambridge is planning a longer maternity leave, choosing family over royal duties.

According to a royal source who confirmed Middleton’s plans with People, Kate and Prince William have decided to spend a few more weeks bonding with their second child, rumored to be a baby girl. The Duchess returned to making public appearances one month after Prince George was born. William and Kate went back to work, making a surprise appearance at the Ring of Fire race in August, and then attended the Tusk Conservation Awards in September.

The source explained, “She felt she came back too soon last time. She wants to have that [family] and enjoy it with George and the new baby.” Middleton pushed for more time at home, together as a family. William agreed, but there were no details on what Queen Elizabeth thought of the extended maternity leave. The royal couple does have one supporter, according to the magazine. Prince Charles encouraged Kate and William to spend more time with the new baby and nearly 2-year-old, George, giving them his full blessing.

Media outlets and speculation from Kate and William’s choices all point to Kate Middleton giving birth to a girl. Bets are all gambling on a Princess. This might be fueled by rumors Kate was spotted shopping for girly baby clothes shortly before her last public appearance. A paint delivery to the couple’s home at Anmer Hall also gave the impression a nursery with soft pink hues was being designed for the Kate and William’s baby.

As for the baby’s name, the frontrunner for Middleton’s baby girl is Alice. Princess Alice has a lovely ring to it, but rumors we’ve previously covered claim Prince William wants to honor his late mother by naming their daughter Diana. It’s pretty clear the Queen probably won’t give her blessing for that choice, but Kate is rumored to be keeping Princess Diana’s memory alive.

According to OK!, Kate Middleton is collecting things Prince William and Prince Harry kept over the years. So far, the Duchess has be given jewelry, letters, and recorded tapes. Middleton is placing the items in a hope chest, and plans on giving it to her children when they are older.

Do you think Prince Charles or Queen Elizabeth would allow Prince William and Kate Middleton to name their baby girl Diana? Kate’s attempt at keeping Princess Diana’s memory alive is touching, but would it be too much to pass on her name? Let us know in the comment section below!