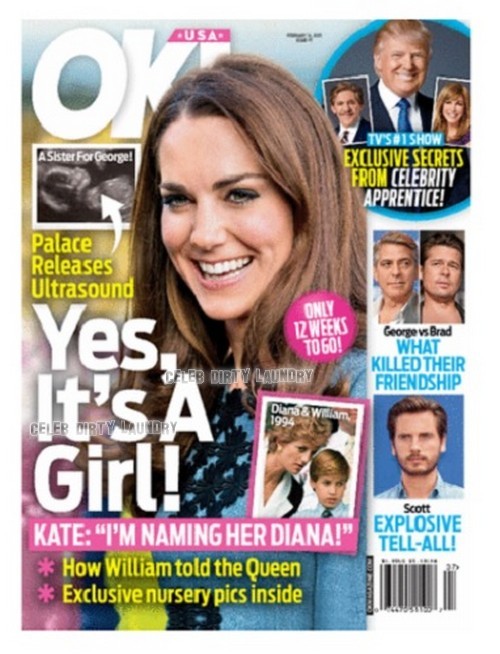 Kate Middleton is having a baby girl and naming her new daughter ‘Diana’ after Prince William’s late mom according to a new report that also shows an ultrasound of the royal daughter. Of course Queen Elizabeth will never allow this to happen – the name ‘Diana’ for Kate’s daughter is an absolute ‘NO’ and I mean this seriously! Prince Charles divorced Princess Diana amid terrible scandal and his long cheating affair with Camilla Parker-Bowles – so if you think that Kate is naming anyone ‘Diana’ then you have lots to learn about the British Monarchy.

Prince William’s pregnant wife Kate Middleton is having a baby girl! (As if CDL hasn’t been saying that for months.) The February 16 cover of OK! Magazine screams, “Yes, It’s A Girl,” and features a photo of the Duchess of Cambridge smiling like a giddy child on Christmas morning. According to the cover of the tabloid, they have exclusive photos of Prince William and Kate Middleton’s daughter’s ultrasound – straight from the Palace!

It’s no secret that Kate Middleton is pregnant with a baby girl, the news was leaked weeks ago. We’re impressed because it must have been a tough time for OK! to manage to get their hands on Prince William’s unborn baby’s ultrasound photo. The cover of the magazine goes on to reveal that Kate Middleton has announced to the Royal Family that she is naming her daughter Diana, after her husband’s late mother, Princess Diana. The name Diana has been tossed around a lot lately, but the odds of Queen Elizabeth allowing a royal heir to be named after Princess Diana are slim to none. Some other likely names of the future Princess that have been floating around are Elizabeth (after the Queen herself), Margaret (after the Queen’s late sister), and Charlotte (the middle name of Kate’s sister Pippa Middleton).

The February 16th cover of OK! Magazine also teases that they have exclusive photos of Kate and Will’s baby girl’s nursery, and an inside story about the exciting moment when William told Queen Elizabeth that the second child was a girl. Kate Middleton has been reportedly buying pink furniture for months for her daughter’s nursery. And, Kate’s sister Pippa has been reportedly spoiling her future Goddaughter already, so it isn’t surprising that her nursery is ready to go.

So, are you convinced that Kate Middleton is having a baby girl now? Do you think that she and Prince William will really name their daughter after Princess Diana? If they try go through with it how will Queen Elizabeth react? Let us know what you think in the comments below!

Prince William and his then girlfriend Kate Middleton and Pippa Middleton enjoy a boat ride while they soak up the sun in Ibiza with their friends in 2011!