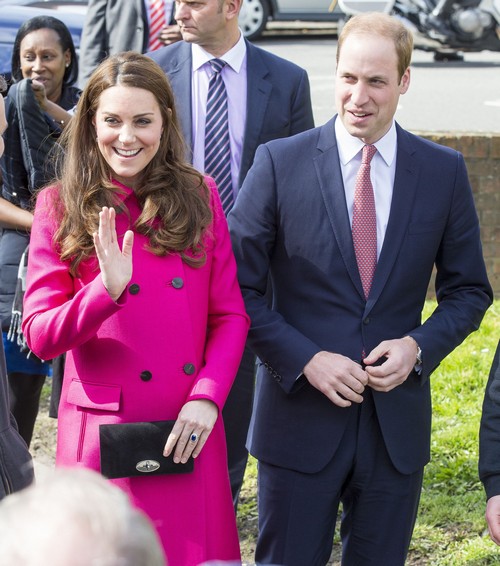 The Royal family is in a major feud over what to name Prince George’s baby sister, and with Kate Middleton’s selection of ‘Posh Pink Paint’ hues for the baby girl’s nursery at Anmer Hall, any debate about the sex of the next heir to the throne is absurd. CDL confirmed that Kate Middleton and Prince William were expecting a baby girl back in October 2014.

Pregnant Kate Middleton’s due date is just two weeks away, and Prince William’s wife is expected to head to the hospital to give birth to their baby girl just after April 15. Prince William and the Duchess of Cambridge have had months to decide on a name for their baby – but it is down to the wire and they still haven’t chosen one.

It’s no secret that Kate Middleton is very close to her commoner family and mother Carole Middleton – despite the Royals’ protests. Kate wants to honor her mother and name the baby Carole, but Queen Elizabeth and Prince Charles refuse to have a member of their family named after a lowly commoner. Generally when Kate is at odds with the Royals her husband Prince William jumps to her defense, but not this time. Prince William has heart set on naming their daughter Diana, after his late mother, Princess Diana.

Queen Elizabeth and Prince Charles are in an uproar over the two names that Kate Middleton and Prince William are considering for Prince George’s baby sister. For obvious reasons they don’t want a member of their family named after the Middletons, and after all of the scandal that Prince Charles’ divorce from Princess Diana brought on the Royals – the last thing they want is to drudge up the history and name the baby after her.

Camilla Parker-Bowles naturally despised Princess Diana (the feeling was mutual) and the last thing she wants is the people being reminded of her affair with Prince Charles. Sources say that Camilla Parker-Bowles is actually pushing Will and Kate to name the baby after herself – she thinks that the people will finally acknowledge that she is a member of the Royal family and future Queen if the baby is given her namesake.

Ironically, the number one choice at the betting pools right now for the future princess, Kate Middleton’s baby girl, is not Carole, Diana, Elizabeth, or Camilla. It’s Alice! What do you think William and Kate will name their baby? Are they going to name Prince George’s little sister after a commoner or a member of the Royal family? Let us know what you think in the comments below!