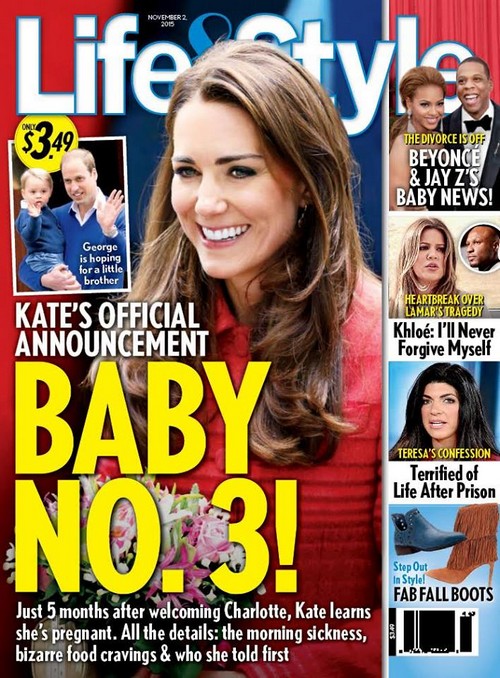 Is Kate Middleton pregnant with baby number three? The Duchess Of Cambridge and Prince William just welcomed Princess Charlotte in to the world less than six months ago, but according to a new report – Kate is already pregnant with a third child.

This week’s edition of Life & Style Magazine insists that Kate Middleton is pregnant (again). The cover teases, “Just 5 months after welcoming Charlotte, Kate learns that she is pregnant. All the details: the morning sickness, bizarre food cravings, and who she told first.” Oh, and of course Prince George is “hoping for a little brother” – because you know that toddler told Life & Style that himself.

There is no doubt in our minds that Kate Middleton and Prince William will have another baby, but the odds of Kate being pregnant already are slim to none. The Duchess Of Cambridge is still trying to get her bearings, and is struggling to balance her Royal Family duties with being a mother of two babies.

Not to mention that Kate Middleton is just emerging from a serious bout of post-partum depression. The last thing she and Prince William would do is add another high-risk pregnancy plagued by morning sickness to that list.

Second of all, if Kate Middleton is pregnant – Life & Style Magazine is unlikely to be the first media outlet to break the news. This is just the beginning, basically every week from now until the time Kate is pregnant again – a tabloid is going to publish a story claiming that she is, until eventually it sticks and she really does have another royal bun in the oven.

Do you think there is any truth to the report that Kate Middleton is pregnant with baby number three? Share your thoughts in the comments below!