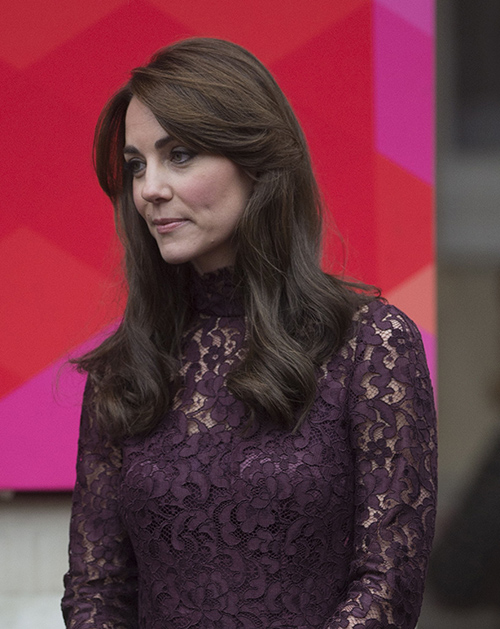 Kate Middleton attended her first state dinner on Tuesday and she looked stunning. Middleton was on hand with her husband Prince William along with Prince Philip and Queen Elizabeth to greet the visiting Chinese President Xi Jinping and his wife Peng Liyuan during the white-tie dinner.

Despite the squabbles and rumored marital issues that Kate and Prince William have been having, the Duchess of Cambridge was able to get through the night without any embarrassing mishaps. As a matter of fact, Kate’s presence at the state dinner was one of the highlights of the night.

Prince William’s wife wore a stunning red gown, said to be designed by Jenny Packham, but it was her beautiful tiara that has everyone talking. Kate Middleton was wearing the diamond and pearl covered Lotus Flower tiara. The special headpiece belongs to Queen Elizabeth and has belonged to the royal family since the 1920’s and belonged to Queen Elizabeth’s mother.

Kate has only been seen in public wearing a tiara a total of three times. Once was during her wedding to Prince William. She was seen again wearing the same Lotus Flower tiara for the annual diplomatic reception in 2013.

There were 170 guests on hand for the banquet. Kate Middleton was seated at the table alongside the Chinese president and Queen Elizabeth. Kate was photographed toasting the occasion with Chinese President Xi Jinping.

Prince Harry was also in attendance at the state dinner. He wasn’t at the high table and certainly wasn’t dressed as formally as his relatives. Instead, Prince Harry was said to be sporting a bit of beard stubble that went well with his black puffer jacket. Prime Minister David Cameron, Chancellor George Osborne were also among the banquet attendees.

While Kate Middleton was experiencing her very first state dinner, Queen Elizabeth is a veteran of the extravagant affairs. The Queen Mother has hosted 110 state visits over the past 63 years. Hopefully Kate was taking notes on how to throw a proper state dinner. Rumor has it that Queen Elizabeth is considering skipping over Prince Charles and Camilla Parker-Bowles in order to name Prince William the next king.