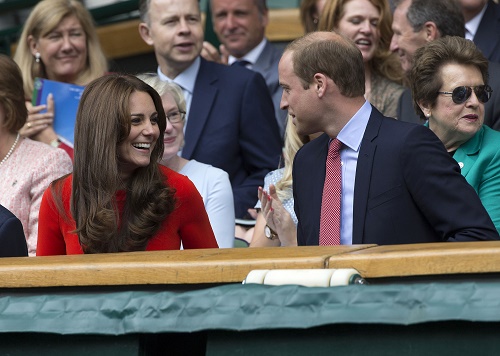 Kate Middleton has convinced Prince William to let her adopt a baby from Africa, and the royal family is not happy about it! On June 26, Will and Kate sat down for a tea date with American royalty Brad Pitt and Angelina Jolie, and after their chat Kate Middleton decided that she wanted to follow in their footsteps and adopt a baby from Africa. Of course, this isn’t the first time that rumors have popped up about the Duchess of Cambridge wanting to adopt a baby, after her bouts with severe morning sickness with her first two pregnancies – but it looks like they are really planning on going through with it.

According to the July 27 edition of GLOBE Magazine, Kate Middleton and Prince William’s meeting with Brad and Angelina was eye-opening for the Duchess of Cambridge. An insider dished to GLOBE Magazine, “Kate was close to tears as Angie talked about the plight of abandoned children in war zones. And when she heard about the orphanages full of kids who are frightened and alone she decided to do something about it.”

Prince William was skeptical about adopting a baby from Africa at first, but after mulling over the idea he is apparently on board with Kate Middleton’s decision. But that doesn’t mean that the rest of the royal family will be okay with it. Before Princess Diana passed away back in 1997 she was actually hoping to adopt a baby from Africa; however, the royals shot down her plans. Now, Prince William loves the idea of completing his mother’s dream, while simultaneously inspiring others to help out with the crisis in Africa and take children in.

GLOBE Magazine goes on to reveal that Prince William and Kate Middleton have already checked out some orphanages in Angola, and they plan to go full-steam ahead with an adoption. Do you think that Queen Elizabeth will allow an adopted child in the royal family? How will the change the royal family’s dynamic? Let us know what you think in the comments below!