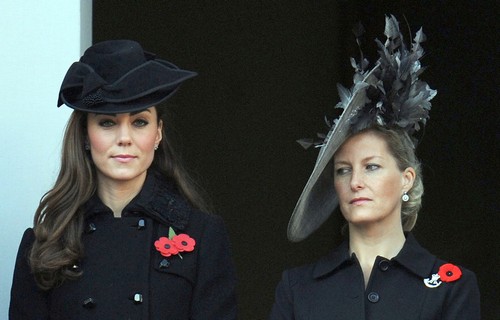 Kate Middleton with her wardrobe malfunctions and famous laziness has been replaced by Countess Sophie as Queen Elizabeth’s favorite daughter-in-law! Countess Sophie is less entitles than notoriously lazy Kate Middleton and also avoids those embarrassing wardrobe malfunctions that drive Queen Elizabeth crazy. Sophie Rhys-Jones, Countess of Wessex and wife of Prince Edward is coming into her own at almost 50 years old, and she is finally giving Duchess Kate Middleton a run for fashion icon title.  Countess Sophie has a new-found confidence and has dropped the comfortable look she’s had for so long, taking more risks with fashion, slimming down, and sporting a new hairstyle. Countess Sophie is said to be prettier now than she ever has been. Perhaps it is from the confidence she has gained as she’s continually praised by the Queen  and noted for being very well liked as she never rocks the boat.

Many believe that it is the “Kate Effect” that has sparked Sophie’s desire to take a piece of the spotlight. Married to the Queen’s youngest son for 15 years, Sophie is also mom to two children. Lady Louise, 11, and James (Viscount Severn), seven.  And while she may have kept a low profile in the past, she is inadvertently ending up in the spotlight more and more. The Daily Mail gave readers a glimpse of just how down-to-earth the Countess is, and it is just this classy, conservative behavior that has resulted in her earning the title of favorite daughter-in-law of Queen Elizabeth.  The Royal was said to have carried her own skies, and her children carrying their own as well, without any special treatment as they were holidaying in Zermatt, Switzerland.

Though Countess Sophie uses many of the same designers as Kate Middleton, it has always been Kate that’s been praised for being a fashion icon. In fact, many designers Sophie had used for years were suddenly propelled into the spotlight once Kate wore their designs. Sophie, as a result, is said to be a tad bit envious of Kate and no longer wants to be overlooked. Sophie’s fashion sense may not have been front and center in the past, but she has always had a good sense of style. In fact, she’s been named the first-ever patron of the London College of Fashion.  And Prince Edward may very well be supporting his wife’s desire to steal a little of the spotlight. The Daily Mail shares, “There is also the aggravating pressure — especially felt by Prince Edward — that the Wessexes are sliding inexorably down the royal pecking order. The arrival of a second child for William and Kate will push the Earl and Countess of Wessex, and their children, further into the margins of royal life.”

Expect to see Countess Sophie in the spotlight more and more as she confidently sends the message to Kate Middleton that she is Queen Elizabeth’s favorite Royal. Plus, Sophie seems to somehow avoid Kate Middleton’s frequent wardrobe malfunctions.