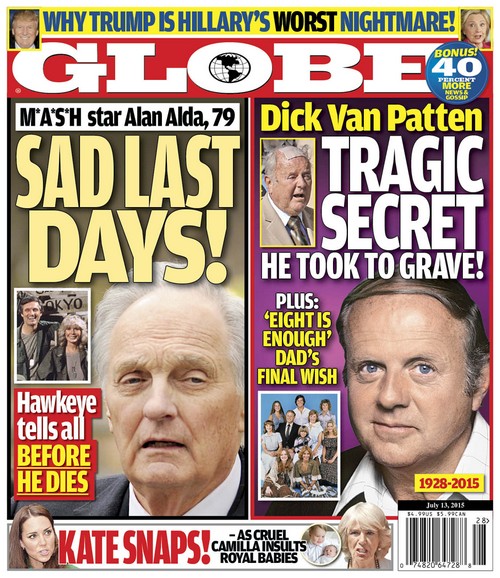 The tension between Kate Middleton and Camilla Parker-Bowles has reportedly reached a whole new level – because Prince Charles’ wife actually had the gall to insult Kate’s babies, Prince George and Princess Charlotte. Camilla Parker-Bowles is in some serious hot water with the royal family, and the gloves are coming off. The Duchess of Cornwall was allegedly caught cheating recently on Prince Charles, and then she threatened to blackmail him with a tell-all book if she didn’t get the divorce that she wanted. In retaliation, Kate Middleton and Prince William banned Camilla from seeing their children and will under no circumstances let her be one of Princess Charlotte’s godparents.

The July 13 cover of GLOBE Magazine reveals, “Kate Snaps! As Cruel Camilla Insults The Royal Babies.” Camilla never was that warm towards Kate and William’s kids anyways, but it is most likely driving her insane that she is being cut out of their lives. Not because she adores them or misses them, but simply because Camilla Parker-Bowles hates being told what she can or can’t do. The GLOBE cover doesn’t specify how exactly Camilla insulted the royal babies, but nothing would surprise us when it comes to Prince Charles’ second wife.

In other celebrity gossip news, the July 13 cover of GLOBE Magazine reveals that M*A*S*H star Alan Alda is on his last legs at age 79, and the iconic actor is planning on “telling all” before he passes away. “Eight Is Enough” star Dick Van Patten recently passed away, and he tried to take a dark secret to the grave with him, but as always GLOBE was able to get to the bottom of the story and uncover it. Donald Trump’s bid for Presidency has everyone buzzing, and this week’s edition of GLOBE Magazine promises an inside story on why he is “Hilary Clinton’s Worst Nightmare!”

So, what do you think Camilla Parker-Bowles did to insult Kate Middleton’s royal babies? What secrets is Alan Alda about to expose, does it have anything to do with his M*A*S*H co-stars? What could Donald Trump have in store for Hilary Clinton? Let us know what you think in the comments below and don’t forget to pick up a cop of this week’s GLOBE as soon as it hits the newsstands!