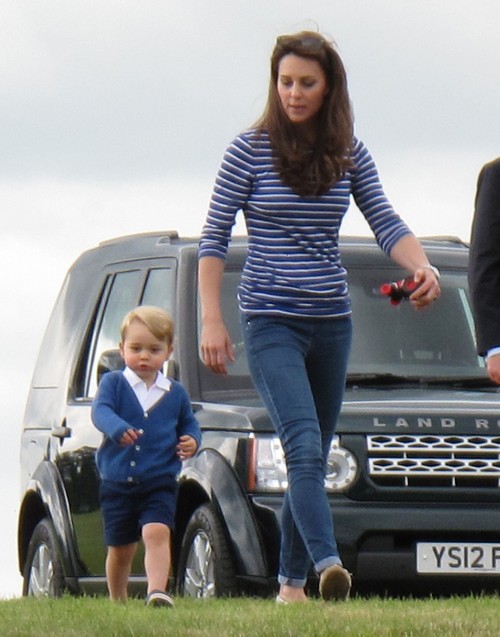 Kate Middleton is currently controlling Princess Charlotte’s christening, creating a low-key event, similar to Prince George’s ceremony in 2013. From the christening gown to the location, the details will be nearly identical, including several senior royals being snubbed, again. It’s also clear Prince Harry will be ruled out as Godfather to Charlotte Elizabeth Diana, as the royal doesn’t have any plans to return from his trip to Africa.

The Duke and Duchess are making preparations for Princess Charlotte’s christening, which will be the first time all 4 members of the family will appear together, the Daily Mail notes. The event is going to be very similar to Prince George’s christening, including a tight guest list. Of course, the Middleton family, including Michael and Carole Middleton along with James and Pippa Middleton, will be front and center along with Queen Elizabeth, Prince Charles, and Camilla Parker-Bowles.

Prince Harry will be noticeably absent the report notes, ruling him out a godparent. Harry has already left for Africa, and there are no current plans in place for his return. Pippa Middleton is still rumored to be a favorite for the position of godparent to Princess Charlotte, along with William’s cousin Peter Phillips.

According to the Daily Mail’s report, around 20 VIP guests will be in attendance. The royal couple may be snubbing some of the senior royals, keeping the ceremony small and family-focused, but they will be opening the paddock next to the church. “While the service inside the church will be private, The Duke and Duchess of Cambridge will be pleased to welcome well-wishers into the paddock outside the church,” a spokesman for the royal family confirmed. “The Duke and Duchess are hugely grateful for the warm wishes they have received since Princess Charlotte’s birth – many of them from local people in Norfolk – and are delighted the paddock can be opened on the day of the christening.”

You can also bet another photo, taken by a Queen-approved pro, will be taken. Queen Elizabeth, Prince Charles, Camilla Parker-Bowles, Prince Phillip, the Middletons, Prince William, Kate, Prince George, and Princess Charlotte will likely be shown in historical image of the Queen with three of the future monarchs.

Beyond the photo, Kate and Carole Middleton appear to be in control of everything other detail. Charlotte will wear the same christening gown as Prince George, and the same VIP guests will be invited, focusing on close family and friends. The Archbishop of Canterbury will also conduct the ceremony, just like he did for Prince George’s event.

As we shared earlier, via a report from the Globe, Prince William was said to have had a major fight with Camilla Parker-Bowles, banning her from seeing Prince George and Princess Charlotte. It may have subsided, as Kate Middleton shared a carriage with her during the Queen’s birthday parade, and Camilla was photographed chatting with a rather reluctant looking Kate and William after a charity polo match. Perhaps, the Queen intervened, as CDL has speculated. Camilla Parker-Bowles is due to be present for the christening of Princess Charlotte.