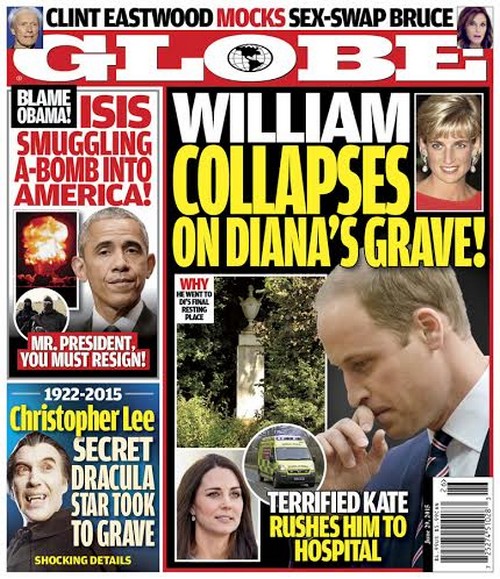 Kate Middleton just gave birth to Prince William’s second child Princess Charlotte, but the stresses of being a father of two babies coupled with the royal family’s drama have taken a toll on the Prince. While trying to juggle a newborn baby and a toddler, Prince William has been dealing with some major drama – his father Prince Charles’s second wife Camilla Parker-Bowles was just caught cheating and is allegedly blackmailing the future King into a $400 Million divorce. Prince William has taken the scandal especially hard, and recently confronted Camilla and banned her from seeing the babies.

According to the June 29 cover of GLOBE Magazine, the stresses are hitting Prince William much harder than anyone realized, and he recently collapsed at his mother Princess Diana’s grave! Kate Middleton and Prince Williams baby girl was named after Princess Diana, and no doubt her emotional birth dredged up some memories from the past for the Prince.

William is reportedly having a tough time dealing with the fact that his mother isn’t around to meet her grandchildren, and they are stuck with the wretched Camilla Parker-Bowles as a grandparent instead. This week’s cover of GLOBE Magazine reveals that while paying respects to his late mother Princess Diana, Prince William collapsed at her grave – luckily his wife Kate Middleton was there and had her emotionally drained husband rushed to the emergency room.

And, in other celebrity gossip news, GLOBE teases that they have uncovered a dark secret that the late actor Christopher Lee tried to take to the grave with him. Also, readers can expect a piece on Clint Eastwood, and his controversial comments about transgender reality TV star Caitlyn Jenner, formerly known as Bruce Jenner.

So, why do you think Prince William collapsed at Princess Diana’s grave? Was it just the emotional stress taking a toll on him, or could he have more serious health issues? Let us know what you think in the comments below and don’t forget to pick up your copy of GLOBE Magazine as soon as it hits the newsstands!