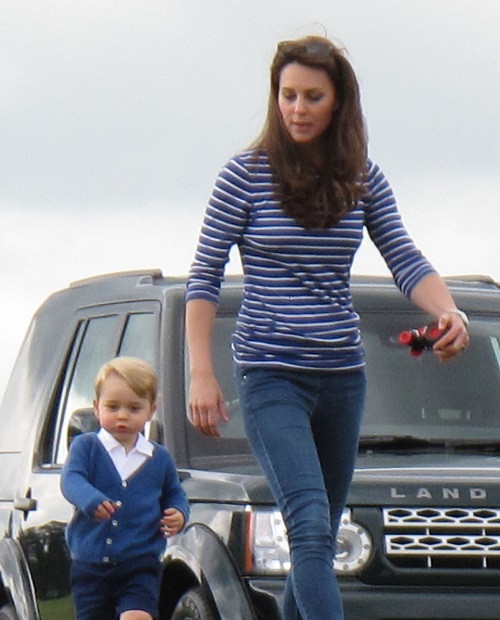 Kate Middleton clearly loves the family-side of her life, but is she battling postpartum depression after the birth of Princess Charlotte? The Duchess of Cambridge is even taking on Queen Elizabeth with her preference to raise the royal children with middleclass values, but according to new reports, Kate is battling some “dark moods” and is canceling plans to have another baby next year.

Kate returned to making public appearances 6 weeks after delivering Princess Charlotte Elizabeth Diana. It seems that the Duchess and Queen Elizabeth had a battle of the wills when the Queen demanded she be present for her birthday parade. Speculation grew that Kate was going to defy Queen Elizabeth and enjoy her maternity leave, but Kate Middleton was present at Trooping the Colour. The Duchess also attended a charity polo match Prince William and Prince Harry participated in the very next day. Kate brought Prince George and watched over him and the two played together without the help of a nanny.

The Duchess’s sunny smiles and attendance to events may not be as happy as they appear to be, according to National Enquirer. The media outlet claims Kate might be battling postpartum depression. “She’s really down in the dumps, and has been getting teary-eyed and irritable,” the royal insider shared. “Kate’s been so down that she’s simply hibernating. Everyone, especially William, is desperately trying to coax her out again, but nothing seems to be working.”

If the report is true, Kate suffered some postpartum depression after giving birth to Prince George. The Duchess bounced back, but the hype of Princess Charlotte’s birth along with the restless nights have been draining on Kate’s emotions. If the Duchess is dealing with some kind of baby blues, it might impact her plans for another royal baby.

Other royal insiders have been insistent Kate Middleton is going to have another royal baby. In the days leading up to Princess Charlotte’s delivery, family members and friends of Kate’s told various media outlets they were excited for the second royal baby, but knew the tot wouldn’t be the last baby from Kate Middleton and Prince William.

The Enquirer’s post supports the theory the Duchess wants to more children, but this “funk” Kate is in might hinder that. “Kate was like Superwoman!” the NE source divulged. “She was full of energy and talking about going back to doing royal engagements. She even said she was raring to have another baby next year!”

Is Kate Middleton dealing with postpartum depression? Is the Duchess’s slim post-baby body thanks to stress? Let us know in the comment section below.