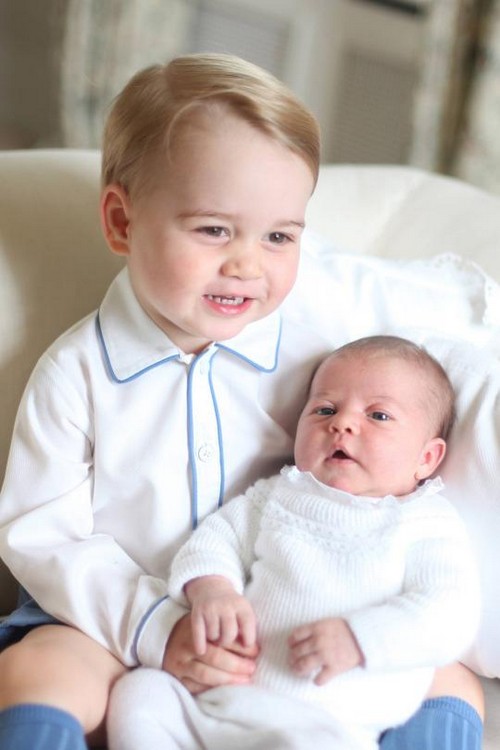 Typically, first official photos of royals are taken by a pros and “celebrated society photographers.” However, the Middleton family is continuing to break stuffy royal protocol. The first pictures of Prince George were taken by his grandfather, Michael Middleton. With the release of first official photos of Princess Charlotte, the royal revolution continues as Kate Middleton snapped the photos to share with the world.

Four photos of Princess Charlotte were dubbed “charming” by British media. Charlotte is now a month old, but the pictures of the Princess were taken two weeks ago at the royal couple’s home, Anmer Hall. Prince George also joined in on the photo session and is featured in the pictures with his little sister.

Related: Click Here to see a photo of what Princess Charlotte is expected to look like at the age of 18 years.

Don’t count on an official glimpse of Kate Middleton post-baby just yet – you know vain Kate is still dieting like mad to regain her svelte figure post pregnancy. According to the insiders who shared details on the photos, the Duchess of Cambridge is not featured in any of the 4 photos of Princess Charlotte and Prince George. No word on whether or not Prince William is in any of the images was shared, so it sounds like royal fans will only see Charlotte and George.

The reception of personal photos being used as the first official images of Prince George were mixed. Michael Middleton snapped the photos that were labeled a “good first effort,” but the reactions have not fazed the Middleton family. Carole Middleton is reportedly still staying with Kate and William at Anmer Hall, making several changes. Carole is basically running the home and insists on breaking royal traditions for a more “normal” lifestyle.

The Duchess seems to be equally passionate about raising Prince George and Princess Charlotte with “middleclass” values. Kate was recently spotted taking George to a public park where they played a game, chasing each other around pretending to be monsters. Typically, royals prefer to have the nannies undertake the tasks of raising the royal children. The Middleton family is breaking the tradition, much to the Queen’s dismay.

The use of social media to share the first official images of Princess Charlotte is also being questioned. Kensington Palace is using Twitter and Instagram to release to tease the official release by sharing one photograph and hour before the entire set of 4 images is released. A spokesman reportedly issued a statement explaining that the Kate and William wanted to “thank social media users and recognize the hundreds of thousands of additional people who have followed the official Kensington Palace accounts in the month following the birth of Princess Charlotte.”

What do you think of Kensington Palace’s use of social media to share first official images of Princess Charlotte Elizabeth Diana? It’s hard to judge the little princess yet but Prince George is adorable! Is the move to control the agenda and do things in a ‘middle-class’ sort of way part of Kate and Carole Middleton’s royal revolution? Let us know in the comments below.