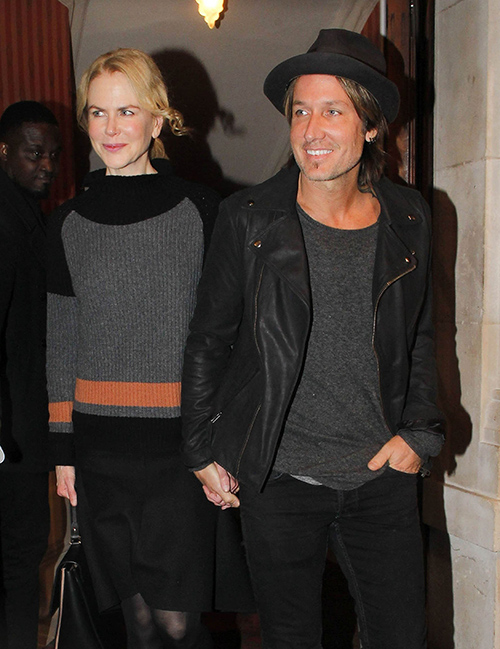 Is Keith Urban facing divorce drama? Why did the singer attended father Bob Urban’s funeral solo? Nicole Kidman, it is believed, was too busy to accompany Keith. Is the real reason Kidman didn’t go because Keith and Nicole are fighting constantly and on the verge of divorce?

The country music mega star’s father Bob died on December 5 after a 10 year battle with prostate cancer. Keith, his brother Shane, mother Marienne, and other Urban family members were on hand to bid farewell. The private service was held in Queensland, Australia on Thursday, December 17. Noticeably absent were Keith’s wife Nicole and the couple’s children Sunday Rose and Faith Margaret.

Why didn’t Nicole attend the funeral services for her father-in-law? Hello! reports that the actress “is thought to be too busy filming” the movie “How to Talk to Girls at Parties.” The magazine pointed out that Kidman posted a photo on her personal Facebook page – the photo is public – from the set of the movie last week.

Another news outlet – The Daily Telegraph – reported that Nicole and the couple’s two daughters were “too grief-stricken to attend” following the death of Kidman’s own father Antony in September 2014. When Nicole’s father passed away Keith cancelled a charity event in California and immediately jumped on a plane for Nashville to be with Kidman. Yet, Nicole didn’t go to Australia with Keith for Bob’s funeral?

The Urban-Kidman marriage got off to a rocky start in 2006. Not long after the power couple married on June 25 of that year, Keith – October 12 to be exact – checked himself into the Betty Ford Center. At the time Urban had a history or cocaine abuse. Insiders have said that Nicole has never quite forgiven Keith for the embarrassment caused by Urban’s relapse and subsequent rehab.

Earlier in 2015 there were whispers that Keith and Kelsea Ballerini were having an affair. Ballerini was touring with Keith and was spotted entering Urban’s tour bus, emerging 20 minutes later with a huge grin. Though the affair was never proven, those in the know said Nicole Kidman was furious with Keith Urban – and still is – for embarrassing her once again.

Why didn’t Nicole accompany Keith to his father’s funeral in Queensland, Australia? Keith was there to support Nicole when her father died. Urban was even there for the Kidman family when Nicole’s ex-brother-in-law died in April 2015.

Are Nicole Kidman and Keith Urban fighting constantly? Is the couple on the brink of divorce? Do you buy the story that Nicole is too busy filming a movie? How about the reports that Kidman is too grief-stricken over Antony Kidman’s death just over ago to attend Keith’s father’s funeral?

Let us know what you think in the comments section below and comeback to CDL for the latest celebrity news.