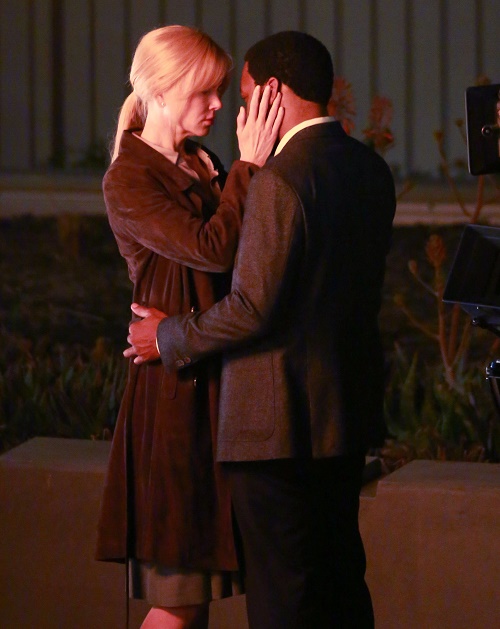 Keith Urban and his wife Nicole Kidman have been rumored to be on the verge of a divorce for months now – the country singer and actress can’t seem to agree on anything these days. Keith and Nicole have been rumored to be fighting over everything from her meddling mother, to what country they live in, to Nicole’s career woes, and even whether or not to have another baby. Nicole Kidman is 47 years old, and determined to get pregnant again, in hopes that it will save her sinking marriage.

Nicole Kidman recently began filming a crime thriller titled The Secret In Their Eyes. On March 11th, photos hit the internet of Nicole in a hot and steamy kiss with her costar Chiwetel Ejiofer. Although the photos were obviously stills of the movie, they further fueled rumors that Nicole has been flirting non-stop with her hunky new costar – and multiple reports are claiming that it has caused some friction in her and Keith’s marriage.

On top of all of Keith Urban and Nicole Kidman’s other marital issues, the last thing their relationship could endure at this time would be a cheating scandal. But Nicole is determined to get pregnant and save her marriage, regardless of whether Keith Urban wants to have another child or not. Even though she is nearly 50 years old, Nicole is visiting fertility experts and checking out her options. According to Naughty Gossip’s sources, “She really wants to have another kid and believes in the science. If it happens she will be thrilled, if it doesn’t – well, she knows it’s a long shot.” This isn’t the first time Nicole mentioned having another baby, in 2014 the actress confessed in an interview that every month she secretly hopes she is pregnant and opened up about her baby fever.

With whispers of a divorce coming, and rumors floating around about Nicole and her costar Chiwetel Ejiofer, one would think that it is a horrible time for Nicole to get pregnant. But the actress seems to be going full-steam ahead with the appointments at fertility clinics. Do you think another baby will save Nicole and Keith’s marriage and prolong their imminent divorce? Let us know what you think in the comments below! What do you think about the Nicole Kidman & Keith Urban divorce?