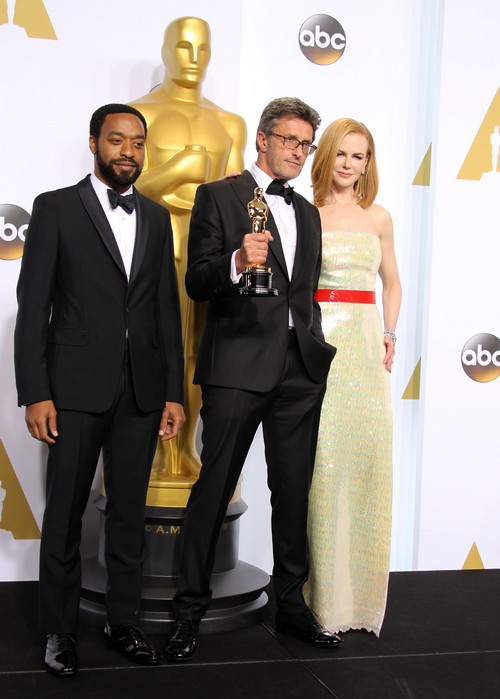 There have been enough rumors of a Keith Urban and Nicole Kidman divorce that it’s easy to take the cheating and affair rumors more seriously than we otherwise would, given the same circumstances. For example, a new report from Star Magazine claims that Keith Urban is jealous of Nicole Kidman’s intimate scenes with Chiwetel Ejiofor in their new movie.

Star’s source elaborates by explaining, “When Keith saw photos of them kissing, he lost it. Nicole has fallen for her co-stars in the past, so he’s very irritated.”

The source also adds that Nicole and Chiwetel have a very close relationship, adding, “They rehearse together in private, and they’re always giggling and whispering about something. They’ve even gone out a couple of nights together.”

Nicole Kidman and Keith Urban have been married nine years, so if Keith gets jealous every time Nicole gets ‘intimate’ with a co-star, I don’t know how he’s managed not to have a heart attack. But at the same time, Nicole Kidman’s career was in a deep slump for much of that nine years, and she’s only recently started working steadily again. Plus, there have been so many rumors of marriage troubles between Nicole and Keith that he might actually have a valid reason for being worried. Then again, Chiwetel Ejiofor is reportedly in a happy relationship with a non-celebrity, so this is all a moot point regardless.

What do you guys think? Is Nicole Kidman cheating on Keith Urban with Chiwetel Ejiofor, and is Keith jealous of their ‘intimate’ scenes together? Or this just another reason for tabloids to jump on the Nicole Kidman and Keith Urban divorce bandwagon? Or is the marriage between Nicole and Keith really that strained?

Let us know your thoughts in the comments below, and don’t hesitate to add your own theories about Nicole’s marriage.